Governor Cuomo's executive order (pdf) calling for police to forcibly remove homeless people from the streets in below-freezing weather went into effect today and, in New York City at least, nothing seems to have changed other than the tenor and frequency of mayor's office press releases about homelessness. Cuomo publicized the order in a Sunday morning Daily News article, reportedly just hours after informing Mayor de Blasio of it the night before.

City Hall received a call at 10 p.m. Sat notifying them of Cuomo's exec order, which DN published a story on overnight

It appears he didn't extend the same courtesy to many other officials whom one might think would need to know about a massive, potentially costly policy change before implementing it across all the jurisdictions in the state. For instance, the order refers to "social service districts" throughout, and "direct[s] all local social service districts, police agencies including the New York State Police, and state agencies to take all necessary steps to identify individuals reasonably believed to be homeless and unwilling or unable to find the shelter necessary for safety and health in inclement winter weather, and move such individuals to the appropriate sheltered facilities." Social service districts are what the local jurisdictions managed by various state social service agencies are called.

Reached by phone, a spokeswoman for the Office of Children and Family Services thought I had reached the wrong agency. Asked what role the agency might play in implementing the governor's order, the spokeswoman, Monica Mahaffey, said, "I can look into it but right now there’s none of which I’m aware."

The Office of Temporary and Disability Assistance, which also oversees social service districts, did not immediately respond to a request for comment.

In Saugerties, Town Supervisor Greg Helsmoortel told the Daily Freeman he hadn't heard about the order ahead of time.

"I'm surprised we have not gotten a directive from him,” he said. "Usually with something like this, we get something."

At the Rescue Mission in Syracuse, mission head Alan Thornton wondered just how this would work, saying: "We can't keep them here against their will. We aren't a correctional facility. We are here to provide shelter and basic needs and ultimately help people access resources to move forward with their lives. So, they could be delivered to the shelter and then five minutes later they could leave the shelter and be back out on the streets."

Still, upstate officials seem more or less to be making an effort to figure out how to comply. In New York City, where 58,000 people in the shelter system and an estimated several thousand more on the street constitute the vast majority of the state's homeless population, Mayor de Blasio is calling bullshit.

"At this point, [the order] seems to simply reiterate what’s already in the law and the power we already have to bring people in off the streets," de Blasio told the Times. "And we use that power."

Specifically, police have the power to arrest and ticket people who are breaking the law, for instance by blocking the sidewalk or peeing publicly, or to forcibly hospitalize those they deem to be a danger to themselves and others. Simply sitting or sleeping outside, meanwhile, is not a crime, and the state has not proposed a mechanism to accomplish any of this, starting with the standard of who officials can "reasonably believe" are homeless. 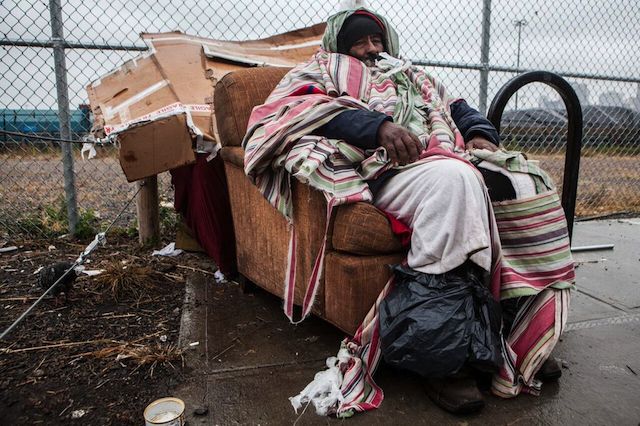 Does the cat guy on Columbia Street in Brooklyn count? He has a subsidized apartment near Times Square but likes spending his days wrapped in blankets, feeding strays and harassing cyclists. Might Cuomo's state troopers mistakenly force him into a shelter at gunpoint?

This hypothetical is getting less useful by the day, as Cuomo's counsel Alphonso David has yet again backed down on the explicit meaning and purported power of the order. Previously, when questioned, he said that the order "obviously...does not mandate involuntary commitment for competent individuals," stripping the order of its Orwellian edge. Now that the mayor's press secretary has said Cuomo would need a state law to add homeless catchers to the public payroll, David is telling the Times that the order is "an administrative policy...not an edict, and it’s subject to interpretation."

"It's hard to even know if it's binding," Sullivan County Manager Josh Potosek told the Times Herald-Record.

Homeless people and their advocates, meanwhile, heaped scorn on the idea as originally proposed, pointing out that the main problem of those living on the streets is lack of housing and mental health and substance abuse services—they have no shortage of authority figures with guns telling them what to do.

"This mayor and this governor aren’t helping," Sheila Turner, an activist who is homeless, told the Times. "You want to take people, snatch them up, put them somewhere they don’t want to be, like an animal?"

In case readers need a reminder of the dire state of the city's homeless shelters, the Daily News rounded up some fresh horror stories.

Coalition for the Homeless president Mary Brosnahan told the Daily News, "Despite the fact that his administration has started to backtrack on this claim, we have major concerns that the governor’s order would forcibly move individuals against their will. Put simply, being homeless is not a crime."

During his mayoralty, Ed Koch sought to forcibly hospitalize not just those who pose an immediate danger, but those who police could "reasonably foresee" being dangerous. The policy, called Project HELP, led to a drawn-out legal battle between the city and the New York Civil Liberties Union over the hospitalization of Joyce Brown, a.k.a. Billie Boggs (pdf). Ultimately, the detente ended without a decisive legal finding either way, but Koch dropped the program amid the controversy (former NYCLU head and Boggs advocate Norman Siegel told the Times the state can't force people into shelters and he'll fight any "dragnet" sweeps). In 1999, then-mayor Rudolph Giuliani threatened to arrest street-dwelling homeless people who refused shelter en masse, but then reportedly failed to follow through.

Nevertheless, the not-in-my-front-yard politics of claiming concern for the homeless tempted Cuomo into the popular stance of demanding coercion of the street homeless. Cuomo's newfound compassion comes after he resisted funding the replacement for the rent-voucher program he cut, a lifeline for the tens of thousands strong shelter population, which spiked in the meantime. It also comes after he failed to meaningfully strengthen rent regulations.

Following publication of the Times's mildly critical article Monday, Cuomo called the paper to say this: "Here’s the dirty little secret: If everyone is doing everything well, why is the homeless street population increasing and why is it worse than it’s been in years? Something has to be causing it. And that’s the question that needs to be addressed."

Not done with scapegoating Mayor de Blasio for the homelessness crisis and sowing confusion on the mayor's turf, Cuomo said he plans to release a comprehensive plan for addressing homelessness on January 13th. The order may give a preview. One passage says that the state will "imminently" make local social service districts "establish comprehensive regional housing and supportive service networks" for homeless people. So-called "supportive housing" is another arena where Cuomo and de Blasio have clashed, so don't expect things to get any more functional in the coming weeks.

The Governor's Office did not respond to detailed questions about this latest fiasco.