Last week, a 14-year-old boy was arrested after allegedly assaulting someone in the Bronx. While Javier Payne was in custody, a police officer allegedly threw him—while handcuffed— through a glass shop window because Javier resisted arrest. Now, the police officer has been stripped of his gun and badge.

The Daily News reports, "Sgt. Eliezer Pabon of the 48th Precinct was placed on modified assignment early Friday after investigators from the Internal Affairs Bureau reviewed a video of the May 17 incident, law enforcement sources said... 'It seems the sergeant overreacted,' a source said. The video shows Pabon shoving Javier Payne from behind, causing the boy to plunge forward and strike the window of the Hookah Spot on Arthur Ave. with his head, shattering the glass, the sources said."

Police nabbed Javier with a friend because an assault victim had ID'd them as his attackers. The boy was apparently bleeding profusely, and paramedics argued with police to remove the handcuffs so he could be treated. 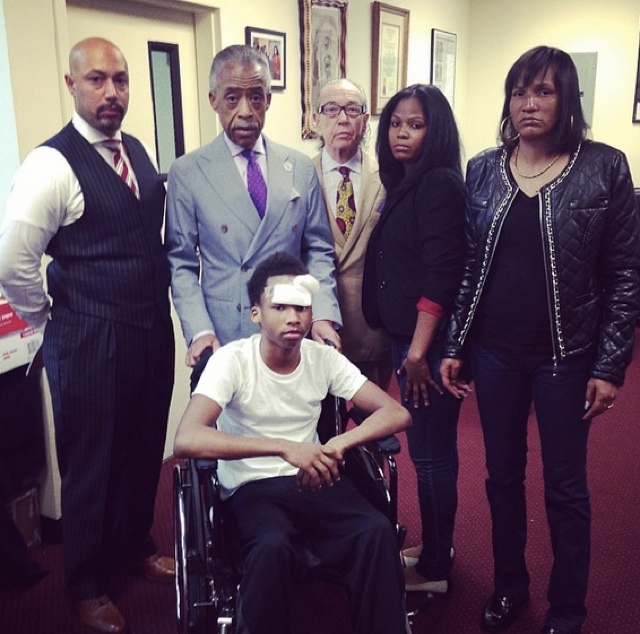 According to Juvenile Justice Information Exchange, Javier's face suffered lacerations while his chest was sliced open and his lung was punctured:

Initially, EMS did not rush to the scene because when the officers put the call over they did not indicate that there was a pediatric emergency, a source familiar with the incident said. Instead they used a protocol normally used for drunks... One of the paramedics had to hold the boys chest wound closed while they rushed him to Jacobi Medical Center. Medical experts said it may have saved Payne’s life.

His mother says Javier weighs 89 pounds. Javier, who was allegedly shackled to his hospital bed, was interviewed by NYPD's Internal Affairs Bureau.

Lawyer Sanford Rubenstein told the News, "There is no excuse whatsoever for a police officer to smash a 14-year-old boy’s head through a plate-glass window."