Clinton Back to Senatoring, McCain (Kind of) Gives Up on New York 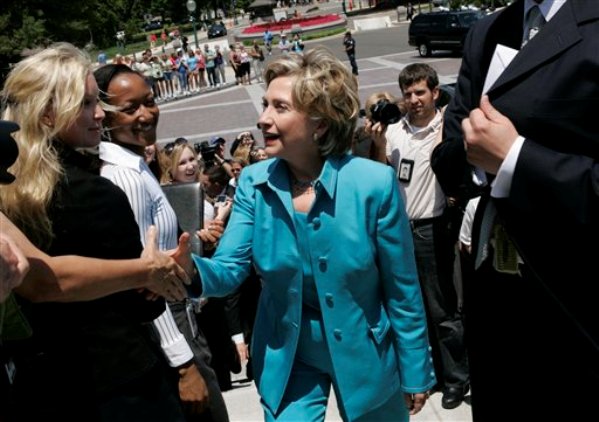 Senator Hillary Clinton returned to her day job yesterday and was welcomed like royalty. Politico found that she was greeted by "a crowd of adoring interns, a phalanx of Senate staff, hugs from Democratic colleagues and an ovation from a closed luncheon of Democratic senators." While she only said she would fully support former rival and Democratic candidate Senator Barack Obama, the NY Times reported:

“It is not something I think about,” Mrs. Clinton said in response to a question about whether she would be Mr. Obama’s running mate. “This is totally Senator Obama’s decision.”

At which point, Mrs. Clinton returned to her Senate office to find that her staff had set up a Ping-Pong table while she was gone.

As for Obama, he has asked his fund-raisers to help raise money for Clinton's $10 million campaign debt "if they have the ability" to do so. The pair are expected to meet tomorrow and make their first public appearance on Friday.

As for Republican candidate, Senator John McCain has opened up a NJ/NY campaign office in...New Jersey. The Sun writes, "The decision reflects a nod to sobering poll numbers and limited campaign funds"--the poll numbers being ones that show Obama leads by 14-15 points in NY. Though a Republican has not won New York since 1984, Edward Cox, chairman of McCain's NY campaign, said the Empire State could be in play and they would target Clinton supporters, "This is a very fiscally conservative state. There are lots of Reagan Democrats."