Justin Trudeau, Prime Minister of both Canada and my heart, met with President Trump at the White House today to discuss trade and, hopefully, not going to war with Canada, but who knows! Anyway, unlike the Trudeau/Obama bromance, it appears our new president won't inspire any sexy intra-continental leader fan fiction, hard as that may be to believe. The good news is, Trudeau managed to escape Trump's handshake of doom! The bad news is, Trump is still President.

Here is Trump greeting Trudeau, who is as wise as he is beautiful: note how he pulls back to prevent Trump from yanking him into his personal space for a small eternity:

Perhaps we'll be invading Canada after all?

Then, Trudeau sat down with Trump for a photo opp in the Oval Office. Though the meeting was reportedly fairly cordial, a Getty photographer managed to capture what one must assume is Trudeau's soul slowly collapsing at the prospect of swapping out his beloved Obama for a pile of expired Cheeto dust with access to nuclear codes:

AND WITH VALENTINE'S DAY SO CLOSE!

Today, we are all Justin Trudeau pic.twitter.com/woXgZshntj

Ew, okay. I can do this. 2 seconds, 3 seconds tops and then I'm letting go. #TrudeauMeetsTrump pic.twitter.com/IX38FoouYC

The White House then released a joint statement from Trump and Trudeau crowing about Canada and America's "profound shared economic interests," their intention to keep to "building on this existing strong foundation for trade and investment and further deepening our relationship, with the common goal of strengthening the middle class," and "commitment to continue to strengthen our ties for the benefit of our mutual prosperity and security." Note that President Trump has loudly criticized the North American Free Trade Agreement, in which Canada is closely involved, but said today that Mexico is the real problem with NAFTA. Canadians are white!

Later, at a joint press conference, Trump bragged about the election and spewed an alternative fact that "a lot of people are very, very happy right now" with respect to his presidency. The two also briefly discussed Syrian refugees—Trudeau said he will continue to accept refugees and try to "be a positive example in the world," but he won't put the cranky toddler in charge of the United States down for a nap. "The last thing Canadians expect is for me to come down and lecture another country," Trudeau said.

He might not lecture, but he'll definitely throw shade. 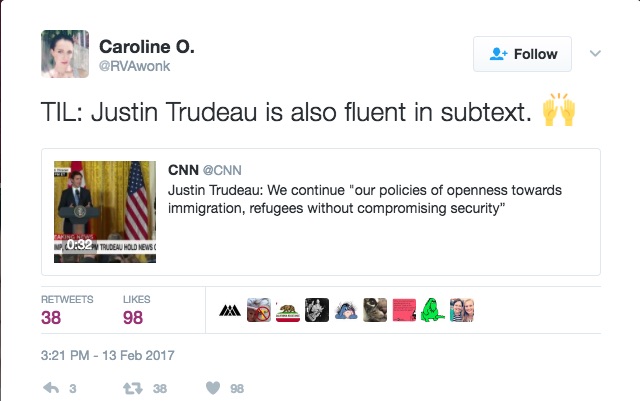 But don't worry, Trump made us look smart and cultured.

I liked it just now when Trudeau said "Trump" in French and Trump looked over like a dog that understands its name and nothing else.

The five boroughs are expected to see 1 to 2 inches of rain.

By
Kerry Shaw
and
Steve Smith
11 mostly free things to do in NYC this weekend, including festivals, art party

By
Kerry Shaw
and
Steve Smith
Early Addition: There's an unspoken standoff between quiet quitters and the bosses who are 'quiet firing' them
By
James Ramsay
Does Mayor Adams' migrant tents plan violate NYC’s right-to-shelter mandate?
By
Elizabeth Shwe
Queens composting has arrived. Here's what you need to know
By
Michelle Bocanegra
Get the news New Yorkers need in your inbox