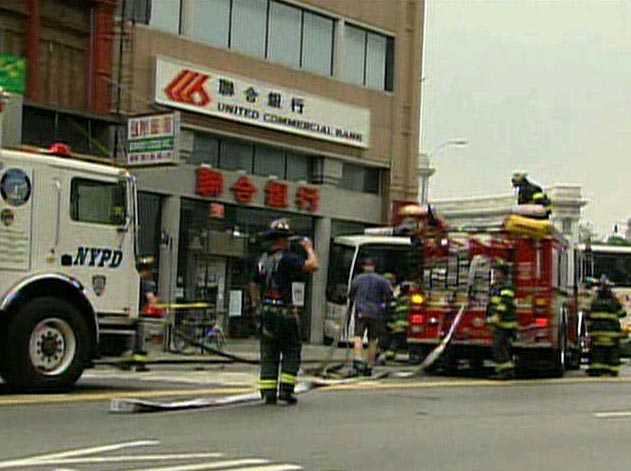 A bus crashed into a building, possibly a bank, near Canal and Bowery in Chinatown. Apparently a dump truck first hit the bus, which caused the bus driver to lose control and swerve into the building. Three people on the private bus were injured, as one person from the dump truck, and WNBC says a pedestrian was hit. One victim was reportedly in traumatic arrest. A reader points out that the Fung Wah bus stop is near that corner, though what kind of bus was involved in the accident hasn't been revealed.

Update: Now the City's OEM notification system says of the accident, "there may be traffic impacts throughout the area. Avoid the area if possible."

Update 2: WCBS 2 says it was a Fung Wah bus that crashed into 77 Bowery and one woman is dead. WNBC now has images (including above). 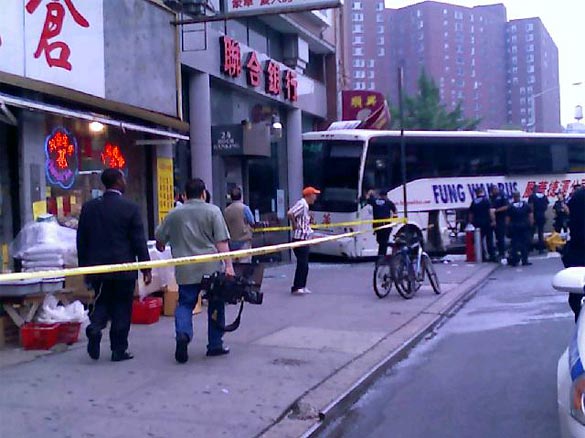 Update 3: WCBS880 has more details, plus this photograph (above): The truck had hit a bus that was waiting to pick up passengers. The fatality was a 57-year-old pedestrian. Also, a traffic light was taken out during the crash. WNBC says the truck had been "moving too fast" off the Manhattan Bridge exit ramp--not a shock, because vehicles do seem to fly off the bridges, but still very aggravating to hear about.