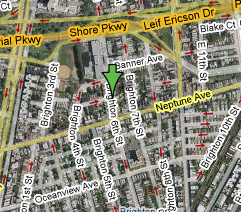 A Brooklyn family is mourning the death of 44-year-old Anthony Senisi Jr., after he was stabbed on the way home from buying some milk Saturday night. Senisi was attacked at Brighton Sixth Street and Brighton Fourth Terrace, near his apartment building. He walked home and collapsed in his 77-year-old father's arms, saying, "Daddy, call the police, someone hit me."

Anthony Senisi Sr. also told the Daily News about the frantic events after seeing his son stagger down the street. First, he made his grandson go inside the house ask for help, so he wouldn't see his bleeding father.

Senisi said he was angry at the confusion that ensued when police arrived.

"Cops, they pushed my son Jeffrey," said Senisi, whose other son, Joseph, is a Brooklyn cop. "I asked them, 'What gives?' And they turned on me."

He also said police cars blocked access to the street, forcing emergency workers to push a gurney to the house from a nearby corner, wasting precious time.

Police believe that suspect Mejia Cinto may have thought Senisi beat him up earlier in the day; however, Senisi, who would have celebrated his 17th wedding anniversary yesterday, had been with his wife and kids. Witnesses say that Cinto ran to a Q train after stabbing Senisi Jr. They are asking for the public's help in finding Cinto.

Senisi Sr. lamented, "Why didn't I go with him to the store? Maybe they would have gotten me instead of him."