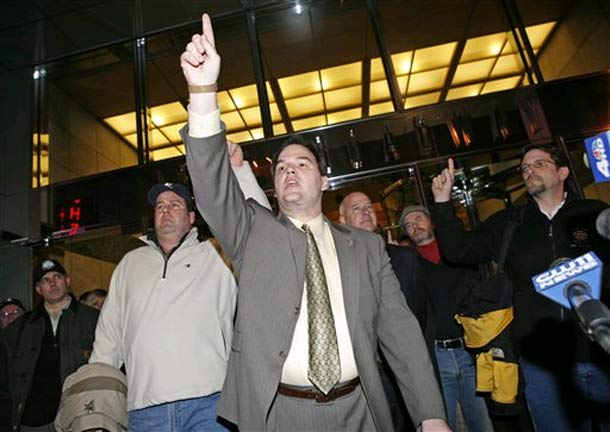 After a strike lasting over three weeks, Broadway stagehands and the league of producers sealed a deal late last night. Most of the 26 productions darkened by the standoff will open again tonight. The new contract is good for five years once the union rank and file votes to approve it, which they’re expected to do within the next ten days. (Local One's website has this announcement for members: "The strike is over. Do not, I repeat, do not report for picket duty.") Union leaders were reportedly satisfied with the stagehands undisclosed wage increase and producers got some of their desired changes to the “work rules” governing how many stagehands perform certain tasks.

The city lost a guesstimated $38 million in tax revenue during the shutdown because tourists left the Times Square theater district a ghost town. Producers say they’re down $19 million from the strike, but since they saved up a $20 million “strike fund” over the past few years by charging a few cents extra on every ticket, it means they’ve still got a million in walking around money. At least they can still afford to go see a Broadway show.

So, apparently, can woman-on-the-street Christina Jennings, 25, from oil-rich Texas, who “ecstatically” told the Post, "We're happy, because we have tickets to see Spamalot. I was very sad, because there's nothing like Broadway musicals. I've been to a million. but they're always amazing."

Yep, Times Square should be back to normal today. Which amazing Broadway show are you going to see first? And the NY Times has an interactive graphic showing how the strike affected Theater District businesses.

Photograph of Local One president James Claffey Jr. after stagehands and producers agreed on a contract and to end the strike by Diane Bonadreff/AP

A mystery car is up for grabs in NYC. Let's try to find it.

Is this a viral influencer stunt, an Anonymous-style art project, or something else? Our reporter is finding out right now.