BREAKING: Something's Happening in Union Square! (And It's Not the Holiday Market) 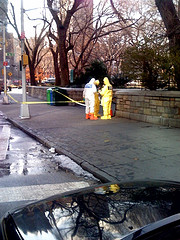 Two years ago Snapple flooded Union Square with a bad attempt at a very large popsicle. Given it was the summer, the pop melted and chaos ensued. Right now there seems to be more panic in the Square, but the thermometer (and guys in hazmat suits) tells us it's not another Snapple snafu.

We just received this notification: "MANHATTAN +SUSPICIOUS SUBSTANCE+ E 17 ST & UNION SQUARE EAST/ SOMETHING SPREAD AROUND THE PARK. [MNS3]," followed by this email from a reader:

What’s going on in union square park. Hundreds of Police form the Hazmat department as well as Environmental protection Units in full space gear. One cop says Hazardous material another says radiation. Cordoned off from 17th St to 14th. Material found on 17th and in the park.

Gawker received a similar email and mentions a mysterious white powder or chemical, and Curbed has a photo of a desolate Union Square. What's going on out there -- I Am Legend promo or should we all be worried? We'll update as we find out more.

UPDATE: Another reader tells us: "The entire non-holiday village section of Union Square has been roped-off with caution tape. The cop told me it was because of a suspicious powder. There are at least 20 police working the scene."

UPDATE: EVERYTHING IS OKAY NOW! (Apparently.) Turns out it was just some good 'ol fashion Union Squaremongering.