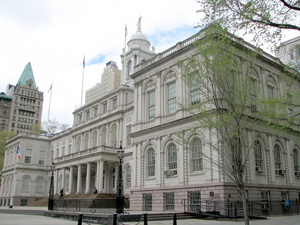 The New York Times takes a look at Rafael Martínez Alequin, who is the publisher of a small independent newspaper and recent evictee from the Blue Room, the room where press conferences are held in City Hall. According to the Times, Martinez Alequin has been antagonizing public officials for years with his questions:

Mayor Rudolph W. Giuliani once called him a “jerk” and an “embarrassment,” and City Council Speaker Gifford Miller asked him in 2005, on Mr. Martínez Alequin’s 72nd birthday, if he would consider “dropping out of this life.”

It was finally Mayor Bloomberg, however, that gave him the boot this April. Only recently was he allowed back inside the press room, but as an uncredentialed observer. Martinez Alequin's publication has slimmed down to an online-only format and operates from Blogspot.com as "Your Free Press." He has been questioning––some might say heckling––public officials for 20 years. This spurs a broader look by the Times at what it takes to be a credentialed press member.

Press credentials are issued by the NYPD, and a department spokesman, Paul J. Browne, said that just declaring yourself a member of the press does not warrant issuance of credentials. While exclusively online media outlets are more than a decade old, traditionally press passes have only been issued to people who write online as adjuncts of more historically conventional organizations. The fact that the NYPD controls the credentialing process and has refused press priveleges to former critics like Leonard Levitt, who once wrote for Newsday and now writes NYPD Confidential, has aroused the attention of the New York Civil Liberties Union.

For what it's worth, former Mayor and current media personality Ed Koch noted that virtually no members of the media that frequents Blue Room events objected to Martinez Alequin's ejection, and there's usually a sense of solidarity among that group in the interest of protecting First Amendment rights. This suggests to us that the guy must really have been a pain. In the interest of full disclosure: we were once denied entry to City Hall at an event that we were specifically invited to and assured was not a press-only event. The temporary refusal of entry was based on a lack of press credentials. It was embarrassing and annoying. Gothamist has been pressing for press credentials from the NYPD for more than three years. NYPD rationalization that the site is unworthy because there's not so much firsthand reporting (because Gothamist doesn't have a press pass) is a Catch-22 probably very common in dealing with City Hall.