A group of about a dozen protesters got into a heated argument with Bed-Stuy Councilmember Robert Cornegy, Jr. on Friday afternoon, when a protest about the fate of the Slave Theater on Fulton Street escalated outside of his offices on Restoration Plaza.

"We're here for three things: To stop the demo [of the Slave Theater], to landmark the historic institution, and bring some actions against these frauds who are doing illegal actions within your community," said Omar Hardy, standing within inches of Cornegy in the windy plaza. "You okayed the demolition of our heritage."

Hardy is the son of 81-year-old Clarence Hardy, the self-described "chief" of the Slave Theater who staged a protest on a window ledge above the building's marquee earlier this month.

On November 24th developer Eli Hemway of Fulton Halsey Holdings LLC purchased the theater from investor Yosef Ariel, along with nearby 10 and 16-18 Halsey Street, for a reported $18.5 million. Work was underway on the property before the sale was brokered, according to multiple complaints filed on the Department of Buildings website.

The building has been under a strict vacate order since 2012 due to structural damage, and DNAInfo reports that papers filed earlier this month by the new owner indicate a full demolition of the property. There have been reports of condos planned for the site since 2013.

The Hardys maintain that Ariel's sale of the property is the fruit of fraudulent dealings dating back several years, and yesterday accused Cornegy of being complicit in the impending demolition by not taking a stand.

"You said that I had something to do with the demolition. I'm asking you: how?" Carnegy said, clearly exasperated, as a member of his staff tried in vain to nudge him back inside. "I'm telling you that I did not okay the demolition. It does not require my okay."

Cornegy, attempting to step aside with the Hardys for a private conversation, shook his head when the group pushed forward again. "That shit right there is fucking inappropriate," he said. When a female protester spoke over Hardy, attempting to reiterate the group's demands, Carnegy snapped "I'm not talking to you!" And, as she persisted, "Why is she talking to me?" 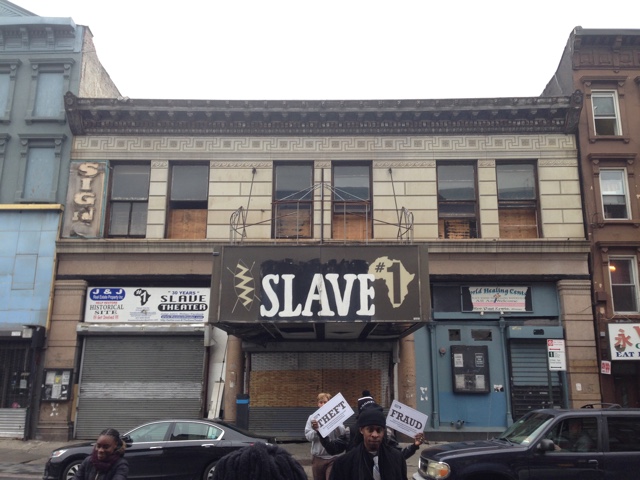 Recognizable for its bold "SLAVE #1" signage, the boarded-up theater at 1215 Fulton Street has a lengthy history of civil rights organizing dating back to the 1980s—after a black man was beaten to death in Howard Beach in 1986, Reverend Al Sharpton started hosting weekly rallies there.

The Hardys say that they are now the rightful owners, arguing that the late Judge John L. Phillips Jr., who had court-order guardianship of the theater, transferred the rights to their LLC before his death in 2008. Clarence has said that Phillips was a mentor to him.

"Mr. Phillips left the property to our corporation to keep in the community for the community, and that's what we're doing," Omar said on Friday afternoon.

Indeed, a thorough Brooklyn Magazine investigation of the ownership battle published earlier this year discovered a 1999 deed transferring the property to one J.J. Real Estate Corporation, the company the Hardys say is their own.

As recently as 2012, the Hardys organized lectures, movie screenings, and even boxing lessons in the theater. Their goal, they say, is to get back to community programing. "Our main focus is arts and education, and definitely the youth and the elderly," Omar said.

But one Reverend Samuel Boykin, the administrator of the late Phillips's estate, believes otherwise. He claimed ownership of the theater in 2011, prompting a legal battle with the Hardys. The Hardys' civil court case challenging Boykin was ultimately dismissed. Boykin has since referred to the Hardys as "squatters."

Ownership of the property is difficult to tack to either party, in part because Phillips spent the final years of his life at the behest of numerous lawyers, thanks to a court ruling that deemed him "mentally incapacitated." One particularly shady document can be traced to Boykin: it transfers the Slave Theater property from Phillips's Inc. to Phillips himself—three years after Philips had passed away. Once "Phillips" owned the property, Boykin, as his executor, could do with it as he pleased.

Boykin sold the theater to Ariel's Fulton Halsey Developer Group in 2013, for $2.1 million. With the most recent sale to Fulton Halsey Holdings LLC, the Hardys have intensified their efforts to save the theater.

Before yesterday's march to Cornegy's office, the elder Hardy attempted to show a group of reporters evidence of the demolition preparations already underway on the property. Attempting to pass through the open back gate on Halsey Street, hung with "Private Property" signage, Hardy was approached by a worker and a woman who described herself as a security guard.

A shouting match ensued, and police officers came to the scene. One told Hardy, "Your argument isn't with them, it's with who owns it."

An hour later, Cornegy argued that the protest was groundless. "The whole purpose of your rally, which is that I, as an elected official, signed off on the demolition, is false," Cornegy said. "That is not true. I signed nothing."

Omar changed tack slightly, arguing that he still would have liked to have Cornegy's support. "I voted you into office," he said. "My father 81 years old was up there on the ledge, and you had nothing to say. You ain't got nothing to say?"

Christie Williams of local activist group The Children of Slaves and Patriots said that she was upset with the council member's response to the demolition of a historical landmark steeped in civil rights symbolism.

"Why doesn't he step up?" she asked. "Even if you're sitting by, your complicit."

But after about 15 minutes on the plaza, Cornegy invited two members of the group into his office for a closed-door meeting. Afterwards, Omar said he was satisfied with the day's outcome. "Cornegy apologized for us not having a sit-down prior to this," he said. "He said that if he hadn't let it slip, that would have prevented what happened today."

"We didn't set out to humiliate Cornegy, but we have to exert all of our liberties," Omar added. According to Omar, Cornegy promised to have a sit-down meeting with local elected officials to discuss the Slave Theater and the claims of fraudulent deeds.

The Hardys say that Brooklyn DA Ken Thompson has already had two sit-downs with them, and has agreed to address the possibility of deed fraud as well. The DAs office declined to comment.