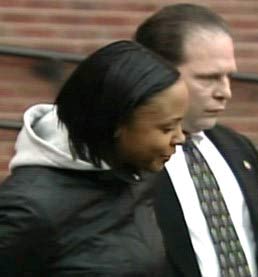 A judge has decided not to grant murder suspect Natavia Lowery bail. Lowery is accused of killing her boss, broker to the stars Linda Stein, by bludgeoning her to death.

Police say that Lowery confessed to snapping after Stein verbally abused her and blew pot smoke in her face. However, her lawyer Ron Kuby had claimed she deserved bail because the videotape confession (which he once referred to as being like a hostage video, since Lowery made it after hours and hours of questioning) Lowery made was coerced, because a lawyer Lowery's stepfather initially retained for her, specifically told police to contact him if she would be questioned. Lowery had contacted police at first to discuss reporters bothering her and said she didn't want anything to do with the lawyer. She was also found to have taken Stein's ATM card, withdrawing cash, and Stein's cellphone.

Judge Micki Scherer did not buy Kuby's arguments and said that "the video provides a detailed version of how the defendant bludgeoned the decedent with a wooden stick and then attempted to distance herself from the crime scene," and referenced Lowery's "substantial ties to Virginia." However, Scherer may later decide whether the confession is admissable.

Kuby's associate David Pressman told reporters, "Where the prosecution has presented no admissible evidence, it is cruel to keep an innocent, pregnant 26-year-old woman with no criminal record in jail. That Ms. Lowery has a boyfriend in Virginia is not grounds for denying her bail. Virginia is not a Third World country where extradition is not available."

Last week, Lowery's bail hearing was dramatic and tense, especially when her mother accused Stein's daughter of killing her mother, "You killed your mother! You know you did it!" and a prosecutor calling Lowery "a wolf in sheep's clothing, one of the most devious, manipulative persons I've prosecuted in 20 years."