Ask A Native New Yorker: Is It OK To Bring My Bike On The Subway?

Are you relatively new to this bustling metropolis? Don't be shy about it, everyone was new to New York once upon a time, except, of course, those battle-hardened residents who've lived here their whole lives and Know It All. One of these lifers works among us at Gothamist—publisher Jake Dobkin grew up in Park Slope and still resides there. He is now fielding questions—ask him anything by sending an email here, but be advised that Dobkin is "not sure you guys will be able to handle my realness." We can keep you anonymous if you prefer; just let us know what neighborhood you live in.

This week's question comes from a transplant who wonders what is the deal with bicycles on subway trains.

I am a relatively recent NYC transplant (approximately a year now) and I had a question regarding bicycles on the subway. First: should those transporting bicycles board the train first or last? I thought it was last, given the amount of space the item takes up, but I frequently see this isn't the case in practice.

And second: is it acceptable for someone with a bike to sit down? I've seen people do it even on a crowded train, and it blocks the people next to them, making disembarking a real nightmare. At the end of the day, I guess I'm just looking for an overview of subway bicycle etiquette. Thanks!

Tired of Grease on My Shins 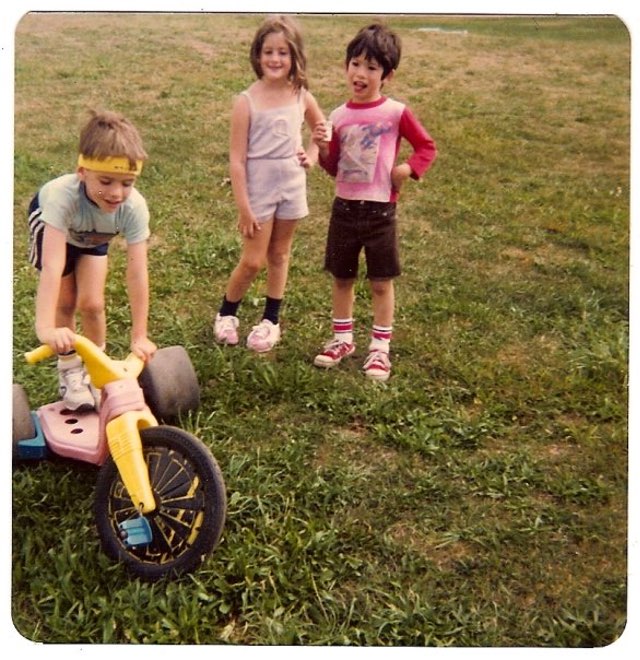 A bike on a train is like a car on a boat: it's necessary only in rare circumstances, and you have to be real careful where you park. Few things annoy subway riders more than attempting to board a crowded train and spotting a seemingly healthy bike owner sprawled over a long, empty bench blocked by his fixie, forcing everyone else to smush together and maybe get jabbed by those spikes on the pedals. Do not be that guy!

The thoughtful bicyclist may find himself requiring a subway assist perhaps once every five years. Maybe you rode over a pile of broken glass, flattened both tires, and the nearest bike shop is four miles away. Or maybe a freak hail storm has descended on the city, requiring you to take shelter underground and ride the train home. Or a long pedal to Coney Island ended in total exhaustion, and it's either the Q train back or you have to sleep on the beach. You get the picture: these are all extreme and unusual circumstances with no easy alternatives. In all other situations, your bike is to be used as it is intended: as an independent vehicle capable of delivering you to any place in the city you would like to go.

If you do find yourself in one of these rare instances, of course you must board the subway in the very front or very back, which tend to be the least crowded, and never in the middle of the train. Once inside, you must place the bike at either end of the car, where there is usually more room. If the train is uncrowded, you can sit behind your bike, as long as you block no more than two seats, and you are willing to stand if someone boards and wants to sit down.

The MTA offers more helpful advice: always use the service gate, instead of trying to loft the bike over a turnstile, and be careful on the stairs. Avoid rush hour trains, and if you can, use the IND/BMT "letter" trains, which are wider than the IRT "number" trains.

One more tip, which for some reason isn't mentioned on the MTA list: never try to stand a bike on one wheel and move it through one of those "iron maiden" standing turnstiles. I once tried this—alcohol was involved, and I was at the wrong side of the Bedford Avenue station in a rainstorm, and I couldn't face riding the one block to the full service entrance. It did not work, and after much struggle I had to be disentangled by a couple of hipsters, who laughed at me. Learn from my mistake!

One reason you see so many bikes on subways is that MTA refuses to allow them on buses, which is clearly a dumb policy. While some bus routes are too crowded for two-wheelers, most have plenty of room, especially at off-hours. Some cities, like Los Angeles, have even added bike racks to the front or back of the bus. Placing a bike on one of these racks is a lot easier than hauling one up and down five flights of subway stairs—if the MTA implemented them, they'd probably keep a lot of bikes above ground. 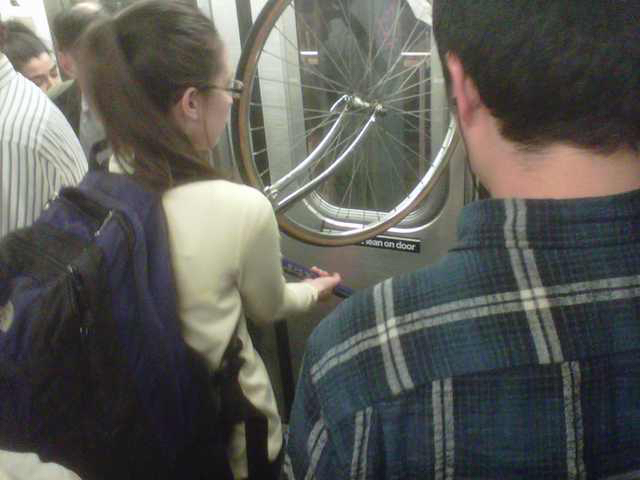 The preceding advice doesn't just apply to bicycles, it goes for any large item—furniture, dogs in bags, pianos, large bunches of balloons, oversized backpacks and other luggage, etc. Avoid bringing this stuff on board, and if you must, use the ends of the cars at the front and back of the train. Remain standing and minimize the amount of space you take up by placing all bags in front of you on the ground. Yes, the floor has been peed on. You can try to balance the bag on your shoes, but really you should have considered this before you chose this method of transportation with so much stuff.

Of course there are times where economic, physical, or meteorological circumstances dictate subway shipment of goods. Taxis are expensive, but ask yourself: is this one of those times where it might be worth it to pay the extra money, rather than antagonize your fellow riders and potentially suffer the embarrassment of being surreptitiously photographed and ridiculed by one of those horrible, callous New York City blog websites?

Or consider waiting until late at night, when there are less people on board, and the weirdos who are riding are much less judgmental about this sort of thing.

A word of advice to the non-biking public: overall, our city's bikers do a great service to mass transit riders, by generally getting themselves to and from work without using the subways or buses, and thereby making more room for everyone else. If, perhaps once a month, you find yourself on a car with a bicyclist, cultivate your zen by recognizing that this must be an unusual situation. Remind yourself that bicyclists are also humans who suffer. Before "accidentally" knocking their bike over and screaming at them, try meditating on your common humanity, and then simply ask them if they'd mind not blocking the seats.

Finally: remind yourself who's really responsible for most subway suffering. Not the bicyclists, not the subway showtime guys, and not the homeless people just trying to catch some rest. The people you should really blame are the politicians in Albany, who underfund our MTA system in order to direct cash to underutilized roads upstate. Some small fixes, like the open-gangway cars, are on the way, but on the whole, the system will remain crowded and unpleasant until our upstate representatives make a strong commitment to moving people out of their private cars and onto buses and trains. Keep that in mind when you're voting in the next statewide elections!

Ask a Native New Yorker anything via email. Anonymity is assured.