The NYPD has still not caught two men they believe stole $2 million worth of jewelry from a store in the diamond district yesterday afternoon, even after officers executed a manhunt on 47th Street that lasted for several hours.

According to police, the one suspect, posing as a delivery man, was buzzed into the Watch Standard Jewelry store on the eighth floor of 23 West 47th Street at around 2:29 p.m. yesterday, while his accomplice kept lookout downstairs. The suspect then brandished a gun, according to authorities, and demanded the four employees in the store hand over jewelry and property from a safe on the premises.

Police say the employees were complying with the thief when 56-year-old Boris Mikhaylov, the father of the store's owner, walked in—the suspect allegedly then pistol-whipped him and gave him a minor injury. Then he and his accomplice fled, taking an undetermined amount of jewelry, watches and money with them.

Officers believed the suspects were still in the building after the robbery, evacuating workers and asking employees in neighboring buildings to stay inside. SWAT teams, K-9 units, helicopters and the NYPD emergency service unit were on the scene. "All of a sudden, the SWAT team had guns drawn, and they were screaming to get out,” Tony Jabaly, who works at 23 West 47th Street, told the Post. “They went through the entire building looking for the guys." 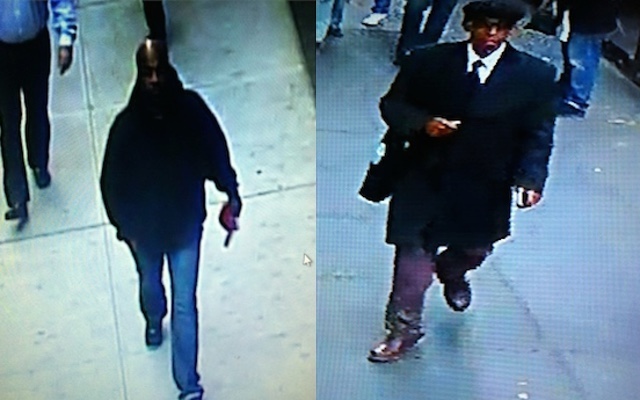 Still, police were unable to apprehend the suspects. Mikhaylov was treated at a nearby hospital and released. "He wasn’t hit that hard, he’s fine,” his son and the store's owner, Danny Mikhaylov, told The Post. “Everybody’s fine, no one’s hurt." He estimates about $2 million worth of jewelry was stolen.

According to the NYPD, the first suspect is a black male who is around 6 feet tall and in his 40s, wearing a dark trench coat, light colored slacks and tweed-colored Kangol hat. The second suspect is described as a tall black male in his 30s, wearing a red baseball cap, True Religion jeans, a black zipper hoodie, and black sneakers.

Anyone with information in regards to this robbery is asked to call the NYPD's Crime Stoppers Hotline at 800-577-TIPS. The public can also submit their tips by logging onto the Crime Stoppers Website at WWW.NYPDCRIMESTOPPERS.COM or texting their tips to 274637(CRIMES) then enter TIP577.

By
Elizabeth Kim
and
David Cruz