The CIA paid two psychologists $81 million to help systematically torture terrorism detainees, some of whom were completely innocent, by beating them, threatening to rape their family members, and subjecting them to unnecessary "rectal feedings" and "rectal hydrations," so as to "exert total control over the detainee," and lied about it for years to Congress, the White House and you.

A 6,000-page report compiled over a period of five years by the Senate Select Intelligence Committee and released in its redacted and abridged form today [PDF] needs no hyperbole. The report states that the CIA knew that torturing people doesn't work. The CIA tortured people anyway. Sometimes that meant letting a detainee freeze to death (one who happened to be innocent). Other times it meant "hummus, pasta with sauce, nuts, and raisins [were] 'pureed' and rectally infused."

As one CIA officer put it, "[r]egarding the rectal tube, if you place it and open up the IV tubing, the flow will self regulate, sloshing up the large intestines." Another speculated, "[w]hat I infer is that you get a tube up as far as you can, then open the IV wide. No need to squeeze the bag—let gravity do the work."

(The torturers obviously didn't know what they were doing: "The CIA placed individuals with no applicable experience or training in senior detention and interrogation roles, and provided inadequate linguistic and analytical support to conduct effective questioning of CIA detainees, resulting in diminished intelligence.")

Even when the CIA's torture victims (kept in secret prisons some called "dungeons") didn't need to be fed, those like Khalid Sheikh Mohammed were sodomized with the rectal feeding equipment anyway, to ensure "total control over the detainee."

In black and white: 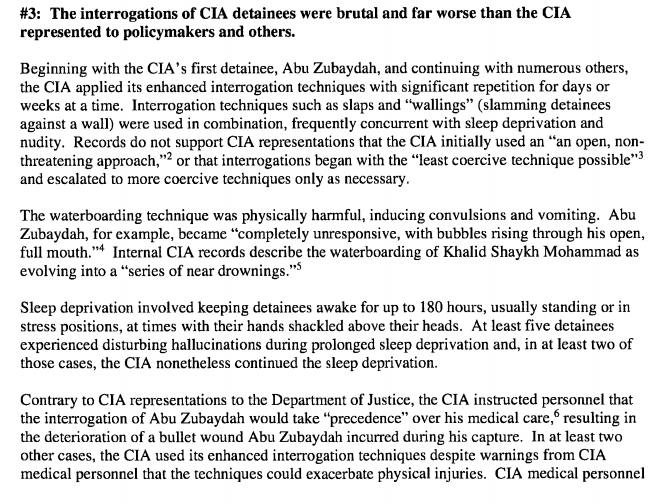 Who designed these atrocities? A pair of clueless and cruel psychologists, straight out of a Nazi nightmare. 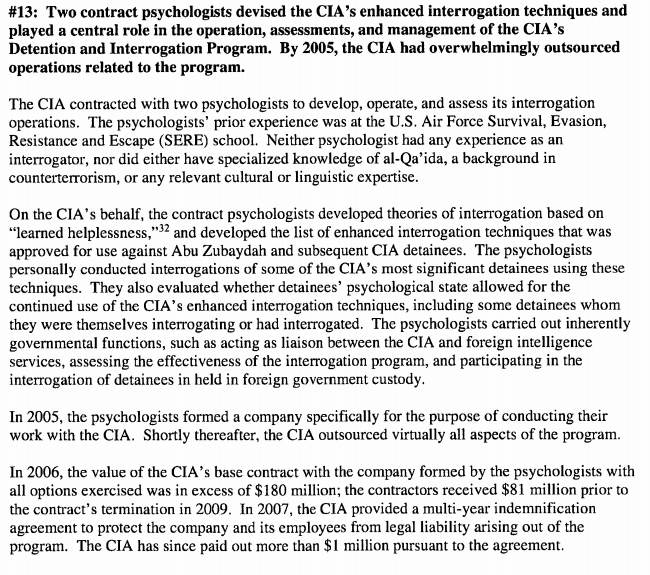 Some people in the White House knew what was happening. Many didn't. (Marcy Wheeler has a good timeline on who knew what, when they knew it, and how President Obama prevented some documents from being released that would further implicate the Bush White House.)

The report notes that in 2003, nearly two years after ad-hoc torture had begun, a CIA memo warned that "[Secretary] Powell would blow his stack if he were to be briefed on what's been going on."

According to CIA records, when briefed in April 2006, the president expressed discomfort with the "image of a detainee, chained to the ceiling, clothed in a diaper, and forced to go to the bathroom on himself."

The report also details how three consecutive CIA directors lied to Congress about torture, but the CIA is supposed to lie—how angry can you get?

Here's former CIA head Michael Hayden, who now has a cushy job on the board of a defense firm (bearing the name of another potential war criminal) and as a professor at George Mason University, justifying torture in your name, in a speech to diplomats in 2009:

Dick Cheney called the report, which he has not read, "a bunch of hooey."