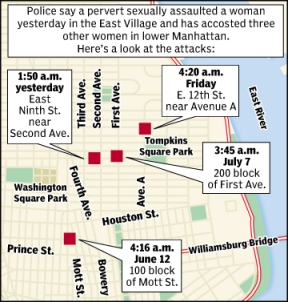 The Manhattan DA's office petitioned a judge for the release of 20-year-old Asuncion Dejesus-Garcia. Dejesus-Garcia was the primary suspect in a string of sexual assaults (see map) over the Lower East Side and East Village in recent weeks, but on Thursday, a woman was attacked under a similar MO - while Dejesus-Garcia was in jail. The victim was assaulted on East 16th Street after her attacker opened the door to her building for her. He then groped her and stole her purse.

Dejesus-Garcia was arrested after two "good Samaritans" recognized him from an attack they helped foil on East 12th St. on July 13th. After his arrest, it was reported that three out of four women who were attacked picked him out of a line up as their assailant. The Daily News now reports that Dejesus-Garcia was only being charged in one of those crimes because two of those three women were uncertain that he was the attacker.

He is still being charged with the East 12th St. attack in which the victim (and the good Samaritans who foiled the attack) positively identified him, but the DA's office wanted him out of jail while it continues its investigation in light of Thursday's similar attack.

By
Caroline Lewis
Flooding hits site of planned migrant ‘tent city’ in the Bronx, intensifying safety concerns
By
Jake Offenhartz
Why the ACLU of NJ says too much of how the NYPD uses facial recognition is shrouded in secrecy
By
Nancy Solomon
and
Louis C. Hochman
Man fatally slashed on L train in Brooklyn
By
Michelle Bocanegra
Get the news New Yorkers need in your inbox