A-Rod Says He is Clean 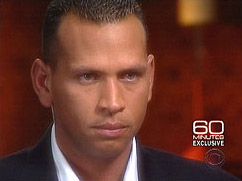 Alex Rodriguez went on 60 Minutes last night and firmly denied that he used steroids. When asked if he had ever used steroids, HGH or any other performance-enhancing drug A-Rod firmly stated “no” and then explained, "I've never felt overmatched on the baseball field. I've always been a very strong, dominant position. And I felt that if I did my work as I've done since I was, you know, a rookie back in Seattle, I didn't have a problem competing at any level. So, no.”

Rodriguez also revealed in the interview that he is not speaking with Scott Boras. Boras, who still made millions of dollars off of A-Rod’s latest contract, has some unique views on the difference between HGH and steroids users. Views that don’t seem rooted in fact. Jose Canseco previously hinted that A-Rod was using steroids and that information would come out in his book. He also said that he was surprised that Rodriguez didn't make George Mitchell's report to baseball.

Perhaps the spectacle of A-Rod defending himself on 60 Minutes will help the players to see how badly tarnished their images are and spur them to act to clean up the game. Then again, after all these years it seems unlikely that the players will suddenly start caring about their image.