The elderly man who was viciously sucker-punched on a West Village street is still in the hospital. Donald Lathrom suffered bleeding from the brain after being knocked to the ground on Monday afternoon, and he thinks his attackers targeted him for sport. 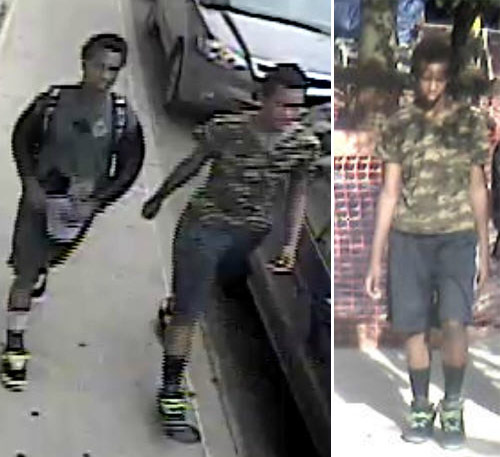 Police released video of the assault, which showed a male standing in front of 99 Jane Street, with his back turned as Lathrom walked down the street. Then, when Lathrom is right behind him, the suspect turns to punch him in the head. Lathrom fell to sidewalk, and the suspect ran, joining a second male across the street.

Lathrom told the Post he was walking home from the convenience store, "I didn’t see him coming... I didn’t even know that I had been punched until [a doorman who helped him] explained it to me." The Post reports:

After the incident, Lathrom told police that he had seen the suspects, believed to be in their early 20s, after leaving the deli at West 12th Street and Eighth Avenue a few minutes before the assault — leading investigators to believe the men intentionally targeted him.

Lathrom said he believes he was the latest victim of the “knockout” game — where one assailant tries to lay out a target with one punch while another shoots video and posts it online.

“That’s what I think it is,” he said. “If it was a robbery, he’d have gone through my pockets or attempted to take something. I had an iPad and a kindle reader. There was no attempt to take anything.”

— "A lot of things you can’t control. We’ve all had instances where bad things happen to us. You just go on... I haven’t been harmed in any real significant way. I do think they’ll do it again, though. One way or another, someone’s going to get hurt"—as well as NBC New York, "I was never concerned" when walking down the street. "I never would have treated this individual with suspicion."

Police have released additional photographs of the suspects. Anyone with information in regards to this incident is asked to call Crime stoppers at 1-800-577-TIPS (8477). The public can also submit their tips by logging onto the Crime stoppers website at WWW.NYPDCRIMESTOPPERS.COM or by texting their tips to 274637 (CRIMES) then enter TIP577.