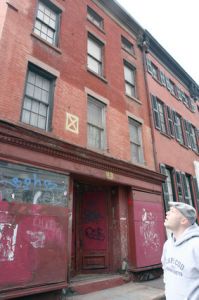 Why would a triplex in the West Village, measuring about 3360 sq ft, go abandoned for decades? More importantly, what's inside? amNY takes a look at the mystery of 43 MacDougal Street, which has had locals rumor-mongering about it for ages.

"I heard that it used to be a hangout for the mafia, and there was a police shootout there, and they had to close it for evidence," said Tal Kon, 22, who has lived on the picturesque block for a year.

"I've heard that the FBI, or the CIA, or somebody closed it down, and that there was a dead body in there," said Ronen Grady, who for four years has operated the hip cafe 12 Chairs across the street.

The building is in the Charlton-King-Vandam Historic District, making it a landmark -- albeit a highly neglected one. Dead bodies or not, the rats have taken over the past home of the Citizens for a Better Village, an Italian American social club. Some of the older residents are keeping hush hush about the place, still following the Omerta code. One did say that Vinny "the Chin" Gigante (of the Genovese crime family) used to work out of the building, adding "They'd be in there, smoking cigarettes. People was used to it." An old NY Times article shows that the place was raided at least once.

Currently there are two owners listed, Abraham and Arthur Blasof, who have been unresponsive. The Greenwich Village Society for Historic Preservation has attempted to contact the Department of Buildings, the Fire Department, and the city's Department of Housing, Preservation and Development, in an attempt to save the building -- but it seems the city is turning their back on the building...which, incidentally, would make for a pretty sweet Duane Reade or Chase Bank.