At today's NYPD graduation ceremony, Mayor Bloomberg announced some impressive news: The 2013 murder total, through today, was 332—a 20.7% drop from 2012's total of 419. This is the lowest since the city started keeping track in 1963. Bloomberg bragged, "New York’s crime-fighting strategies have made us America’s safest big city—and one that cities across the globe want to learn from. Twelve years ago, no one thought New York’s crime rate could go any lower. But it did: since 2001, crime has gone down by 32 percent and in a city of 8.4 million people, there have been fewer than 350 homicides."

He credited the police, telling the graduates it was "largely due to the work of the fine men and women you are about to join." And it happened with a huge drop in stop-and-frisk policing! Fancy that. 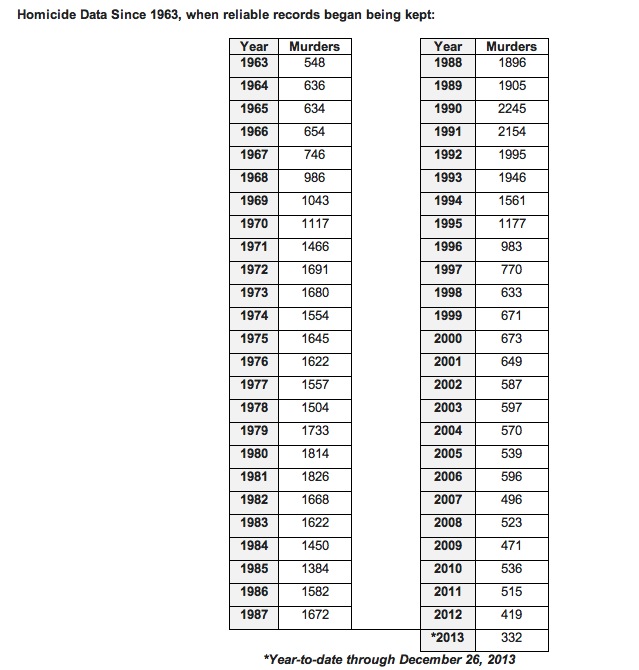 The stunning drop in murders has been attributed to focusing on youth gangs (Operation Crew Cut), "hot-spot policing" and using technology to spot crime trends.

Some other statistics from the Mayor's office, which gives some perspective from the bad old days and from the beginning of Bloomberg's time in office:

- The most murders New York City recorded in a single year was 2,245 murders in 1990 - an average of six murders a day. Today, New York City is averaging less than one murder a day, even though the city’s population has grown by approximately 300,000 people since 2001.

As incredible as this is,there are numerous deaths caused by reckless drivers that aren't factored into these stats.

By
Brigid Bergin
The People’s Guide to Power preview: NY, Puerto Rico and the power of the “sixth borough”