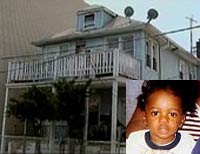 A toddler, who ACS had returned to his family in Queens just one month ago, was declared dead yesterday by authorities. It's unclear how Jaysha Brown died, but he was found with cuts, bruises, and bite marks as well as external injuries that appeared days old. The Daily News reports, "Investigators were trying to determine if the child was murdered - the victim of his mother, her boyfriend or, stunningly, his 5-year-old brother."

The child's mother, Sharee Brown, had been seen by the Administration for Children's Service and foster service more than 30 times this year; in February, a judge ordered that Brown's three children be returned to Brown, after being removing in 2006, but only with "intensive monitoring" from the ACS. The victim's grandmother defended her daughter, but said of her boyfriend, "I couldn't stand him because he beat my daughter. There always was something wrong about him."

UPDATE: The medical examiner classified the death as a homicide, saying Jaysha died of battered child syndrome. A spokesperson said the toddler had "extensive internal and external injuries throughout his body, including to the face and head."

Earlier, the NY Times reported the private lawyer Steven Greenfield appointed by the court to represent Jaysha had objected to returning the boy to the family “because of the prior history of the mother." However, the court spokesman said that Greenfield did not appear to object to returning Jaysha to his mother on a trial basis, "[The judge] left the case open and ordered the kids returned on a trial basis and ordered A.C.S. to do intensive supervision. She did it with the consent of the law guardian. He objected to a final order, and the judge never issued a final order.”

By
Caroline Lewis
Flooding hits site of planned migrant ‘tent city’ in the Bronx, intensifying safety concerns
By
Jake Offenhartz
Why the ACLU of NJ says too much of how the NYPD uses facial recognition is shrouded in secrecy
By
Nancy Solomon
and
Louis C. Hochman
Man fatally slashed on L train in Brooklyn
By
Michelle Bocanegra
Get the news New Yorkers need in your inbox