Riding The Rapids Through The Grand Canyon

Jump into Gothamist Getaways, where we bring you stories about travel, food, new products and handy tips for making your trips—both near and far—more enjoyable. So kick back, dream about your next journey, and let us know if you have any hints for us—email travel@gothamist.com. 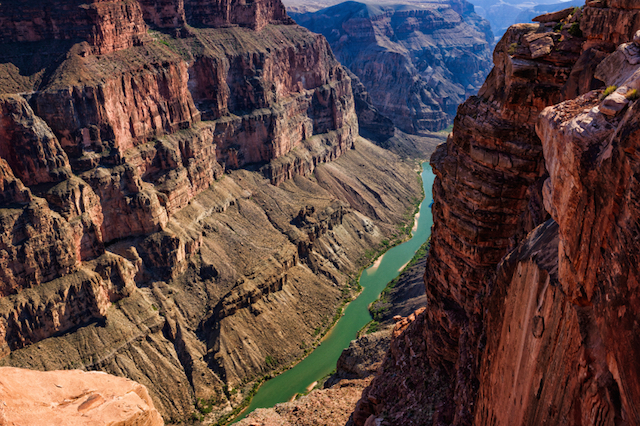 This summer, I traveled 200 miles along the Colorado River through the Grand Canyon with an adventure company called Outdoors Unlimited. It was my first time seeing the canyon, but instead of looking down from the top, for 9 days I looked up at a strip of sky between two towering rock walls. I had rafted down rivers before but not like this, not on this scale. Along this world-renowned stretch of whitewater, the river is deep and fast (and cold!), the waves are huge, and the views are unforgettable.

In order to begin our trip, our group of 15 had to hike from the rim of the Grand Canyon down to its base along the eight mile Bright Angel Trail. On a particularly steep section of the path, we passed some fellow rafters who were hiking out of the canyon after five days on the water. One woman kept repeating the mantra "shower, shower" as she hauled herself up the slope. It was a disconcerting reminder that cleanliness would soon become a romanticized memory.

It had been years since I'd held a paddle, but prior experience turned out to be irrelevant. Grand Canyon rapids are rated out of 10 based on difficulty, and within our first hour on the river we ran an 8 and a 9. It wasn't easy, but each raft was steered by a guide whose calm demeanor filled us with confidence. It was undeserved—as paddlers we were simply the engine providing momentum, following orders like "all forward", "all back", and the all-important "stop". 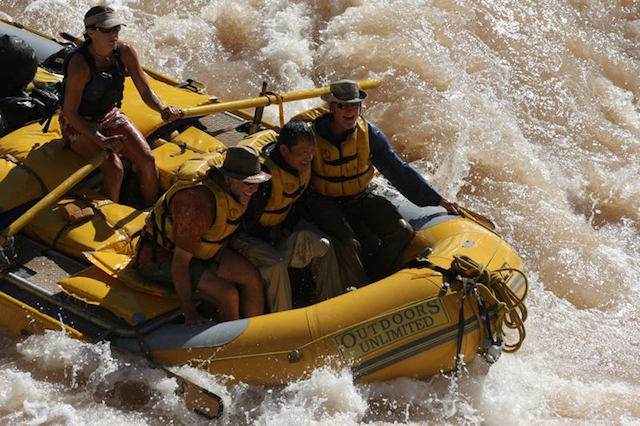 Over time we grew stronger and finessed our technique. I learned how to row with my core instead of my arms, how to stay in sync with my fellow rafters, how to plunge my paddle into the crest of a wave for traction. Some days we would tackle 10 or 15 rapids, other days just one or two followed by a leisurely afternoon floating downstream. At those moments our guides revealed themselves to be floating minstrels as well as skilled boatmen, passing the time with stories, jokes, lessons and games.

I came to love the adrenaline rush of being tossed around a rapid, and would come out the other side soaked and whooping with glee. As my confidence grew the guides let me steer. I went through one riffle (a small rapid) solo on a stand-up paddleboard, on another I "rode the bull", straddling the prow with one hand in the air like a cowboy with a life vest. Any rapid smaller than an eight began to bore me.

However, on the sixth day we came to Lava Falls, which is rated a 10 and considered by many to be the most challenging rapid in the canyon. I watched the raft in front of me capsize right in the middle of it, dumping six people overboard into a rough, rocky churn. Within seconds, the guide clambered onto the overturned raft and began pulling the swimmers back on board. Once everyone was safe, he collapsed in pain. We found out later that he had injured his knee on an underwater rock, and was unable to walk for days. 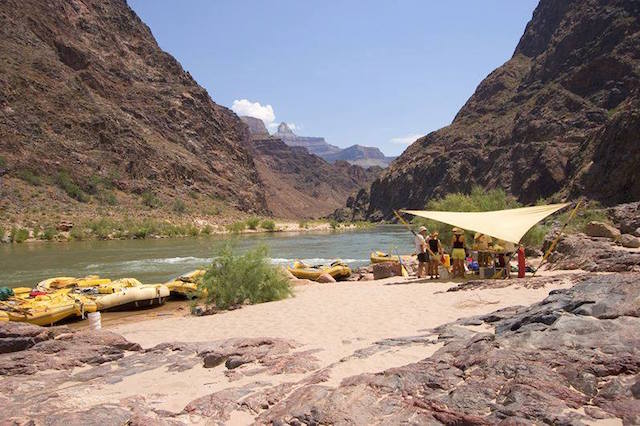 We'd spend around four or five hours per day on the water, and the rest of the time exploring arterial side canyons that branched off the main one. I think of deserts as places without moisture, but this one seemed to be full of waterfalls, which were a welcome change from the opaque brown river. It was on these excursions that we discovered some of the canyon's hidden gems, like Havasu Creek, a chain of magical turquoise pools made all the more enchanting by its hard-to-reach location. Or the Deer Creek Narrows, where we hiked single-file along a slim cliff ledge decorated with ancient Puebloan Indian rock art. The handprints were no larger than a child's, and seemed to high-five us across the centuries as if celebrating the fact that they had survived for so long. 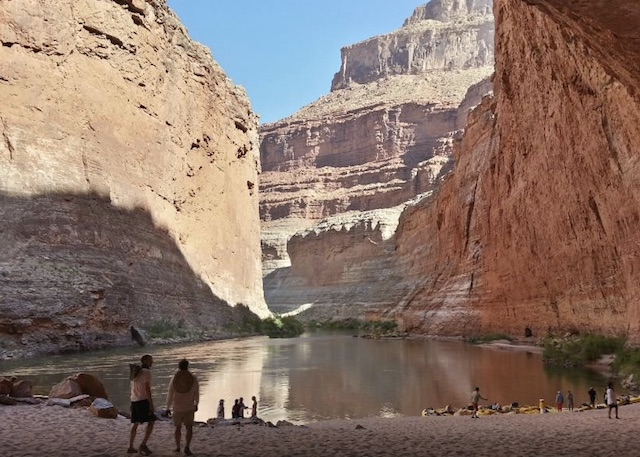 In the late afternoon, we'd set up camp on a sandy river bank and use the last daylight hours to relax, have a beer, write in our journals or play a game of horseshoes. Some of us would attempt to wash in the river, a relatively futile activity since all the camp's liquid waste was dumped just a few feet away, but going through the motions made us feel better psychologically.

Although I briefly contemplated divorce when my husband lost our only soap bar in the water on the second day, it didn't take us long to adjust to our permanent state of grubbiness. It definitely helped that there were no mirrors anywhere, but it was more than that—the unique pleasures of backcountry camping far outweigh the discomforts. Being in nature all day, every day was worth the sunburn and full-body heat rash. Falling asleep under the luminous Milky Way every night was worth occasionally waking up in the rain. And the absolutely amazing three-course meat and seafood dinners our guides prepared for us each evening almost, almost made up for having to use a steel bucket as a toilet.

And the four-digit price tag? Well, that was definitely worth the story.