Five Things To Do In: Marrakech

It's our second edition of Gothamist's travel content, Gothamist Getaways. Four times a year, we'll have a week of posts featuring looks at travel, food, products and tips—near and far—for making your trips more enjoyable. So sit back, dream of your next journey and let us know if you have any hints for us—email travel@gothamist.com.

Located in the foothills of the Atlas Mountains, Marrakech is a feast of color, history, and personality. The city crackles with an exotic, intoxicating energy (particularly at night), owing to its distinctive mix of Arab, French, and Berber influences. While Morocco has a number of fascinating cities and destinations, it's not easy to get from region to region, so Marrakech (along with its surrounding areas) is a popular choice for travelers who want to get the most Morocco in one destination. And you definitely won't be bored—from architecture to culture to scenery, there's more than enough to make the city a destination in itself. 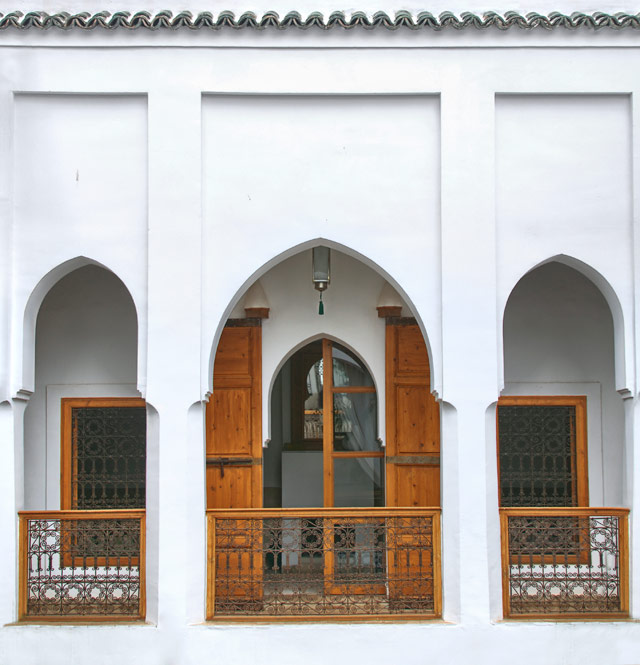 A riad in Marrakech (istockphoto © thumb)

Watch the sunset from Djemaa El-Fna. Djemaa El-Fna is Marrakech's heart, pumping energy and ambience through the rest of the medina (the old city). Declared a UNESCO World Heritage site in 1985, this has been the city's center of culture and commerce since the eleventh century. Its is best known for the foods stalls that open every evening (and close in the early hours of the morning), but there's plenty to see and do here even if you decide you don't want to chance the street food. The square starts to come alive in the late afternoon when snake charmers, musicians, and buskers begin to claim their spots around the open plaza. 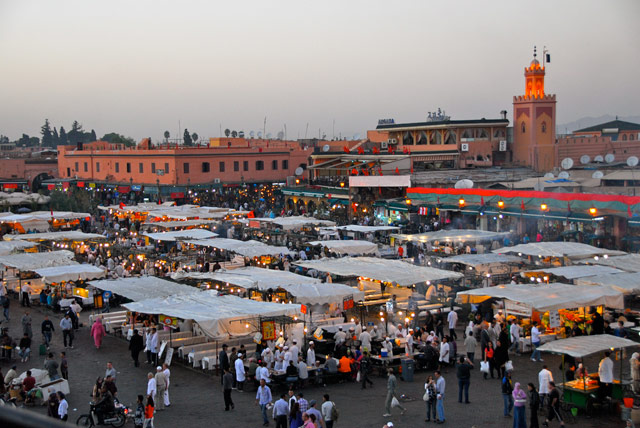 The square starts to come alive in the late afternoon when snake charmers, musicians, and buskers begin to claim their spots around the open plaza. Go at dusk to see vendors putting up their kiosks, then wander the adjacent souks until dusk. When you hear the maghrib (sunset call to prayer), turn to face the Koutoubia Mosque and watch the sky change color behind its majestic minaret. Know This: If you even so much as glance at a snake charmer or diaper-wearing monkey, you will be expected to give a tip. To keep hassle to a minimum, bring a stack of dirham coins (Moroccan currency).

Visit the Jardin Majorelle. This twelve-acre landscaped botanical garden is one of Marrkech’s most memorable attractions, and for good reason. A stunning surprise in the otherwise attraction-free ville nouvelle, this planned garden is full of texture and color, set off by stucco buildings painted a striking shade of cobalt known as “Majorelle blue.” 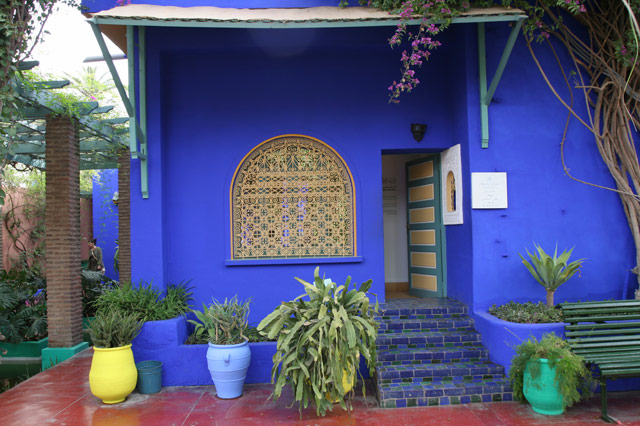 The garden was realized by Jacques Majorelle, a French painter who came to Marrakech in the 1920s to recover from illness and designed the gardens over the next forty years. After Majorelle’s death, the fashion designer Yves Saint Laurent and his partner Pierre Bergé purchased the garden and took on its restoration. After Saint Laurent died in 2008, his ashes were scattered in the rose garden. Know This: Don’t miss the Galerie Love, a tiny exhibition space adjacent to the gift shop where you can see Saint Laurent’s colorful “Love” collages that he sent as New Year’s cards in the ’70s and ’80s. 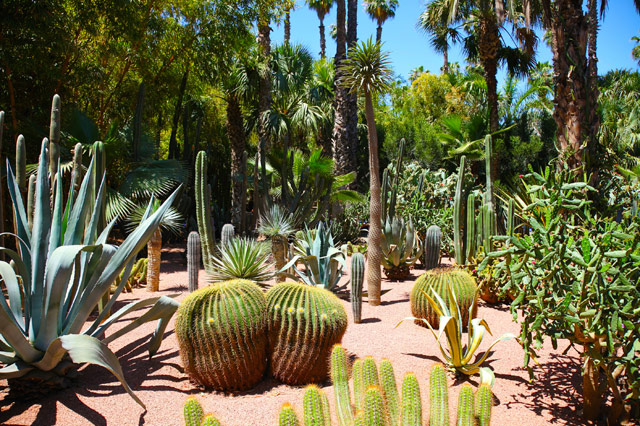 Stay in a riad. A riad is the Moroccan alternative to a hotel, somewhere between a bed and breakfast and an upscale inn. Traditional riads are large private homes constructed around an opulent interior courtyard. In the medinas of Marrakech and Fez, many riads have been converted into boutique accommodations, and the best have been lovingly restored (and subtly modernized) to recreate an authentic Moroccan experience that’s more interesting (and intimate) than a hotel.

Try Riad le Clos des Arts, a well-located riad with friendly European owners. Know This: Morocco does not have much of a restaurant culture. Locals—even ones in the tourist industry—will confess that the most delicious food comes out of private kitchens. Most riads include a traditional Moroccan breakfast in the price of your stay, but many will also prepare dinner if you request in advance. Don’t miss it.

Take a day trip. Marrakech is within close driving distance of a number of interesting destinations that offer nice contrast (and respite) from the city’s intense urbanity. An hour’s drive takes you into the Atlas mountains, where you can hike or ride a mule through tiny Berber villages and take in the panorama over lunch at a mountaintop kasbah. (Or spend the night at Kasbah Tamdot, Richard Branson’s luxurious Atlas retreat.) 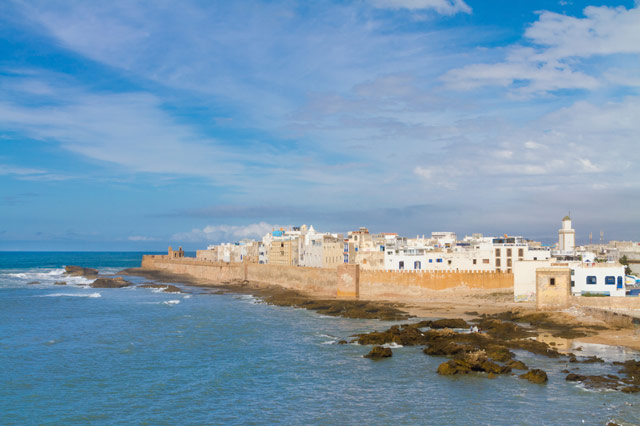 Essaouira, a funky resort town (and one-time hippie enclave) on the Atlantic coast, is a two-hour drive from the city, and the place to go for sand and seafood. Keep your eyes peeled during the drive for trees that seem to be sprouting goats from their branches—you’re not hallucinating. Know This: Trains and buses in Morocco exist, but they’re limited. The most practical way to do one of these day trips is to hire a driver. Riads and hotels can help you find a reliable one.

Try the wine. Though it’s illegal to sell alcohol to Muslims in Morocco, it is not illegal to make wine in the country. In fact, the area’s winemaking tradition goes back to the Roman era, and during colonial times, the French took advantage of the country’s hospitable growing climate (moderate temperatures, with high mountains and cool breezes) to cultivate vineyards.

You might assume that French wine is a safer bet than Moroccan, but in fact, imported wine is often held in customs at uncontrolled temperatures, while many Moroccan vineyards are run or overseen by experienced French winemakers. Red, rosé, and vin gris (white wine made from red grapes) make up most of the domestic production, with a limited number of whites. 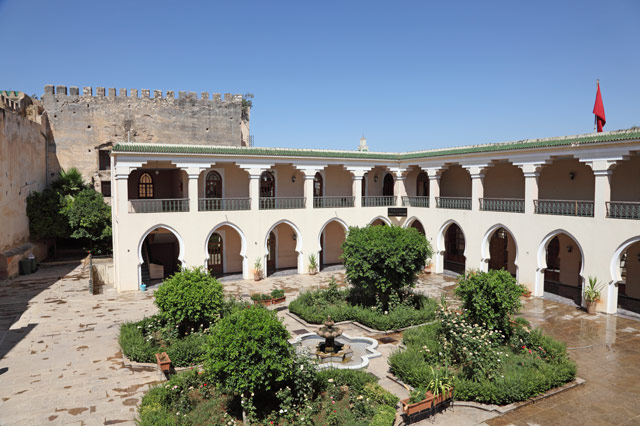 A riad in Meknes (istockphoto © typhoonski)

The center of Moroccan’s wine industry is in Meknes, well to the north of Marrakech, but one of the country’s best vineyards, Val d’Argan is located outside Essaouira, and is worth a visit. (N.B. Val d’Argan has a restaurant, but you should reserve in advance.) Know This: Though alcohol can be purchased easily by non-Muslims in large grocery stores, riads, hotels, and restaurants that cater to tourists, during Ramadan, many of these places will not sell it at all.

Caitlin Leffel is a writer, editor, and author of two books about New York . She recently wrote about New York childhood in literature for Frontier Psychiatrist. Follow her on Twitter and Instagram at @CLO_NYC.