Starting Friday and running through the fall, Chefs Club Counter in SoHo will host a pop-up location of Du's Donuts and Coffee, featuring an evolving and rotating selection of unique cake doughnut gems from Wylie Dufresne, of WD~50 fame. Du's Donuts, which opened in April in the William Vale Hotel in Williamsburg, is the next chapter in Dufresne's adventures in molecular gastronomy.

Dufresne, true to innovative form, collaborated with his head baker, Colin Kull, to perfect the texture and weight of the cake doughnut while developing a variety of intriguing flavor mash-ups, including brown butter key lime, honey fennel pollen, and Mexican hot chocolate. And at $3.50 a piece, these creative little charmers are reasonably budget-friendly, offering a touch of high-end cooking without the Michelin-starred price point. 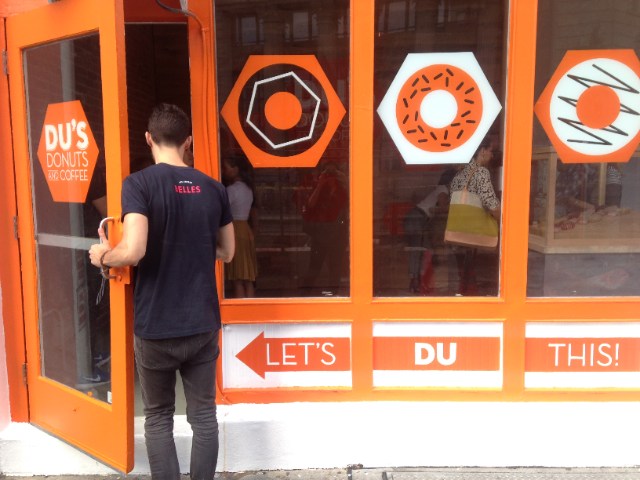 Dufresne notes that the doughnuts draw on traditional and existing flavors, like cherry pie, but also feature playful combinations like pomegranate tahini or banana malt, which is based in Ovaltine. These latter pairings "might not immediately jump out at you as flavors that make sense, but we believe that they work," he told Gothamist.

"Our creative process is very similar to what we've done over the years at WD~50. It's about taking old friends and trying to reimagine them in new ways." Dufresne said he and Kull try to use flavors "that are part of our geography or part of New York City [...and see] how we can riff on them and have some fun with them."