Yesterday we had the tough job of sitting in the garden of Dominique Ansel's bakery on Spring Street and testing out the chef's new creation: the Magic Soufflé. It can barely be described in words, but the treat—a portable soufflé made up of crispy toasted orange blossom brioche shell and fluffy chocolate—led to gasps of euphoria when we dug in.

Served in a box that looks like it's from an old timey carnival, it's the bakery's post-post Cronut (the historical timeline goes: Cronut, Frozen S'mores, Magic Soufflé), and it doesn't disappoint. Just make sure you retreat immediately to the sun-filled garden after you get your hands on it, and devour it on the spot. Ansel was rightfully insistent that we do just that—a worried look came over his face as we all grabbed our iPhones to Instagram the new item before digging in. If you don't delay, the molten center will all the gooey-er.

Today there was a limited run of just 50 soufflés, and they sold out in fifteen minutes. (Tomorrow is their official introduction, and you'll be able to get them at the bakery as well as the SuperPier pop-up.) So there's a chance these might add to the already long lines, and become the hot new item at the bakery that's hard to come by. If you drop by and there aren't any Cronuts or Magic Soufflés, DO NOT FRET. The chef has an entire selection of delightfully fun items, including our favorites: the Frozen S'more (a crispy marshmallow stuffed with ice cream and served on a smoked willow branch) and the DKA (sugar, salted butter, dough... Ansel is said to have one for breakfast every morning). 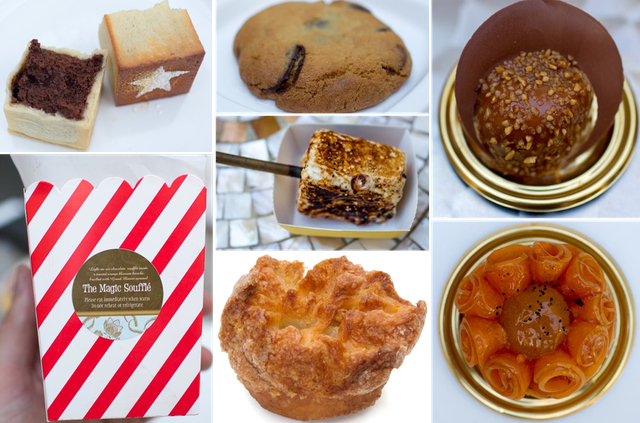 Click through for a look at some other offerings, as well as the newest. And as a sidenote: We recommend taking a few minutes to enjoy whatever it is you get in the garden. There's something sort of other-wordly and magical about the place in the afternoon, after the Cronut crowds are gone. The sun peeks in through the glass, the staff are all smiling, it almost feels like you're on some charming Meg Ryan rom-com movie set and the real world can't touch you. Or maybe that's just how you feel when you consume so much sugar.