There are a lot of spots for dumplings south of 14th Street in Manhattan, but in March, Mimi Cheng's Dumplings will be providing a vegan option in their collaboration with popular vegan restaurant by CHLOE.

Marian Cheng, the co-founder of Mimi Cheng's, says that "ever since by CHLOE opened, we've always been really excited by what they are doing. They're really changing the game in terms of vegan food." And she seemed to have an early idea of what to incorporate based on a popular by CHLOE menu item. "I've been to by CHLOE a bunch of times and everything's delicious, but the guacamole burger is one of my top favorites, so when we discussed the possibility of transforming it into dumpling form, it definitely seemed doable."

This isn't the first time Mimi Cheng's has embarked on a joint effort in creating a delectable dumpling—in the past, they have worked with Emily, a Clinton Hill pizzeria that also offers an excellent cheeseburger.

The folded dumplings are stuffed with a black bean-quinoa-sweet potato patty and corn salsa, topped with by CHLOE's guacamole, beet ketchup and a sprinkling of crunchy tortilla strips. 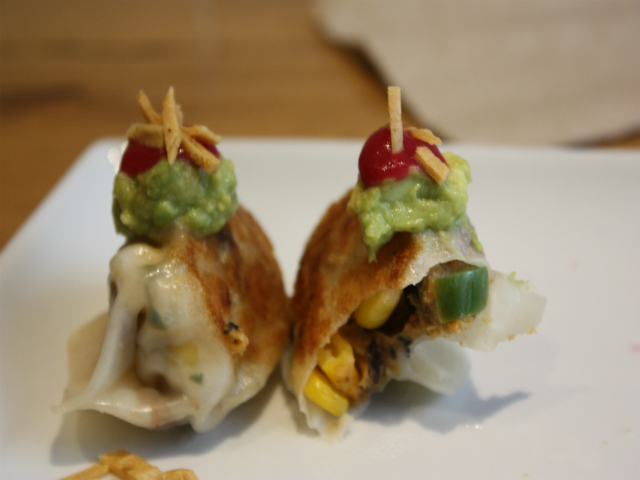 The inside of these vegan pieces of art.

The dumplings I usually go for are far from photogenic: kind of flat and smushed, and only rarely having anything other than a generous coating of soy sauce on top. By comparison, these ones were downright cute.

They are also surprisingly spicy—even after a swig of water, the spice lingers. I think that part of that came from the beet ketchup, which was delicious (I ate the rest of it by itself after I finished the dumplings). The tortilla strips were great, adding a little crunch and texture that I never knew I was missing in a dumpling. However, I found myself wishing for more of the toppings, as the patty was a bit thick and gluey on its own. As a meat eater, I think that might be a slight deterrent for those accustomed to chicken or pork filling, but I felt full after finishing all 6.