Our latest installment of Quick Bites brings us to Bobwhite's new counter in the West Village.

THE VIBE
If you're a fried chicken fan, at some point (or at several points) over the last four years you've likely made the pilgrimage over to Avenue C for a plate of Keedrick Coulter's outstanding bird at Bobwhite Lunch and Supper Counter. I love this small, roughhewn spot, but the far-east location isn't exactly conducive to, say, grabbing dinner on the way to the movies.

Which is why, even among the crush of high-profile restaurant openings this past month or so, I've probably been most excited about the new West Village Bobwhite. Located in that generally unappealing "party zone" of Seventh Avenue South—I wouldn't recommend going here after 7 p.m. on a weekend—Bobwhite West replicates the menu and the laid-back attitude of the original, with maybe a stab at a more romantic atmosphere by lighting a few candles once the sun goes down. Most important: all of that fried chicken goodness is now available within a couple of blocks of seven subway lines.

There are actually fewer indoor seats at the new spot, which is a bit surprising, just ten stools scattered around the triangular room, most in front of a short counter, but there's also a tall table by the window, and a third ledge-like surface facing a wall. Outside, though, it's a sidewalk cafe bonanza, with at least a dozen two-tops that are likely to be filled every evening for the next six months or so. 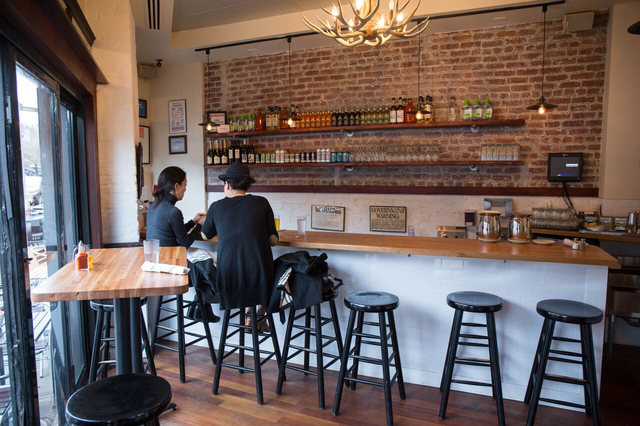 THE BITES
Not only does Bobwhite definitely "still got it," but the food here is actually even better than I remember it being on Avenue C. Which is saying a lot. The thing to get, of course, is the Dark Fried Chicken Plate, which includes a drumstick, a wing, and the coveted thigh. Bobwhite does its chicken Southern style, brining the bird in sweet tea, but they totally avoid the sourness that mars so many such preparations around town. The meat is hot, juicy, and rich; the skin, dredged in flour and mystery spices before boiling in oil, is dark, puckered, crackling. Pour on some of the vinegary hot sauce for extra bite, but you don't really need it. The plate also comes with a first-rate, buttery biscuit (add honey for a real treat) and a tangle of excellent slaw.

I ordered two sides as well, and the Mac & Cheese, which arrived bubbling in its boat, is one of the premier versions of this comfort food basic. The balance here is just right: it's chewy and creamy, sharp and smooth, a nice char on top. The Collard Greens with Country Ham is also pretty perfect, all bitter and sweet, not too stringy or wet. Those guys back there in the kitchen really knows what they're doing. 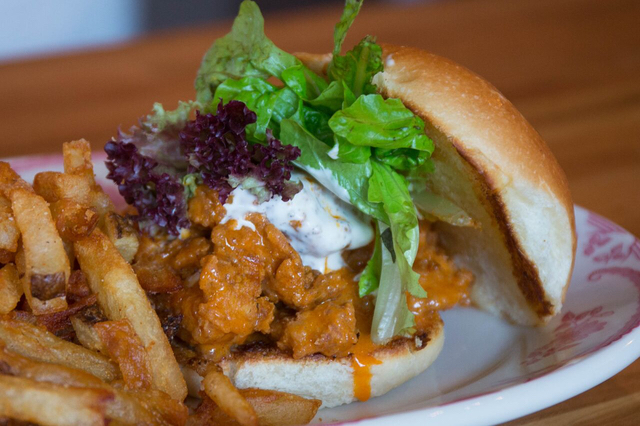 And the hits just keep on coming! In fact, Bobwhite's Buffalo Chicken Sandwich might be the single best chicken sandwich in NYC right now. Made with chicken tenders (shockingly NOT dry white meat!) drenched in vinegar-based hot sauce, topped with ranch dressing to cool things down and add messiness, a pile of greens for color, all on a bun that can withstand the onslaught. I added melted Pimento Cheese, because why the hell not, and have been actively craving a repeat performance ever since.

You get a small hill of salty, crunchy fries with your sandwich, or that crispy cole slaw. Either is a solid choice. There's also the fried Catfish Sandwich here, and its fine, the pickles and remoulade providing some punch, but this is clearly the lesser option.

The Pecan Pie Bread Pudding has long been a Bobwhite favorite, but the West Village version seems even more decadent and delicious than its Loisaida counterpart. Caramel junkies especially, take note: you'll get your fix for days with this monster. The Banana Pudding, packed with Nilla wafers and topped with whipped cream, is also a good choice, if that's more the way you roll.

THE VERDICT
Bobwhite West Village is a solid-"A" Quick Bites spot, ideal for any number of situations. So, yes, absolutely, go sit outside, drink or few beers, and eat some of the city's best fried chicken and/or possibly its best chicken sandwich.

Bobwhite Lunch and Supper Counter West Village is located at 57 Seventh Avenue South, between Bleecker and Morton, and is currently open daily from 12 noon to 10 p.m. (646-861-1743; bobwhitecounter.com)