The Best of Brownsville Pizza 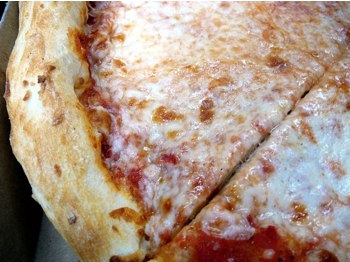 New York pizza can be divided into many categories: neighborhood standbys, brick oven legends, non-traditional pies (thank you Wolfgang Puck), square “Grandma slices;” stuff like that. Good thing there are websites like Slice to sort out the taxonomy of NY pizzeria, and the hundreds of gems throughout the five boroughs. To this list we’d like to add one more- Sal and Paul Pizzeria in Brownsville, a.k.a. Steve’s Pizzeria. The restaurant has changed hands, but still makes the same pies, and they’re good.

Regardless of name confusion, the place has the indications of greatness: locals swear by it, and the dining room, like pre-D.O.H. DiFara, literally looks like it’s been baked for years along with thousands of pizzas (although the place is currently being renovated). Like a lot of traditional places, the brick counter at Sal and Paul is set up for slice-selling straight from the oven through the outside window facing Pitkin Avenue; the service counter inside is set up for ordering pies and things like pepperoni-topped garlic knots.

The crust at Sal and Paul is the key- it tastes like old-style, bygone, early 1980’s era street cart jumbo pretzels, before they all turned into bleached flour urban boomerangs. In that respect, it’s nothing like the browned, burnt, or charred crusts that are criteria for what is considered good pizza these days. Maybe we just miss street pretzels.

Like the enormous pizzas found on Arthur Avenue in the Bronx, the crust at Sal and Paul (or Steve’s) also tastes a little sweet, probably because some extra sugar hastens the dough proofing process.

Cheese at Sal and Paul doesn’t appear to be anything special- just standard, shredded, part skim foodservice mozzarella. Same thing with the sauce, which is slicked onto the raw dough in a thin layer. The sauce does contain small bits of a mystery, spicy red pepper peel that pique the overall flavor of the pie. There are no fresh basil leaves in the immediate vicinity, no post-oven sprinkling of Grana Padano. All in all, however, the whole pie is greater than the sum of its parts- it comes out of the oven bubbly and delicious, with the cheese having a slightly bitter and nutty flavor.