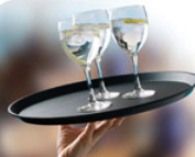 Is that friendly server who just recited the evening's specials an ex-con? Quite possibly, and maybe even more frequently so if the New York State Restaurant Association has anything to do with it. The trade association is rallying behind a newly proposed bill sponsored in the State legislature by Assemblyman Jeffrion Aubry of Queens.

According to Crain's, current laws only allow businesses to "hire convicted felons who have either received an official pardon or been specifically approved by the New York State Liquor Authority." The proposed legislation would eliminate that requirement and make it much easier for restaurants, hotels and sports arenas to hire previously convicted felons.

Rick Sampson, chief executive of the Restaurant Association, believes that the proposed bill would be beneficial on several fronts. Not only would it help fill the current restaurant labor shortage, but it would also meet a more humanitarian need as well; Sampson said, “We feel it’s helping some men and women who have served their debt to society to support themselves.” Let's just hope the ex-cons aren't the ones who have stolen diners' identities from their credit cards.