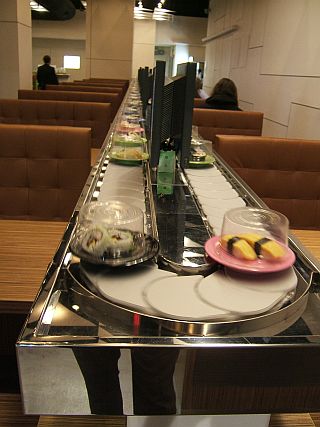 Gothamist finally got to try Sakae Sushi, the new kaiten – or conveyor belt sushi restaurant – the other night. We were quite pleased to find the Singapore-based chain’s first New York City location actually open; when we stopped by last week it was temporarily closed. Given that it’s Fashion Week it was vaguely appropriate to see the plates parading down the runway in the sleek, hypermodern space. Some might dis the pastel-colored plastic plates – beige, blue, green, pink and red – as unfashionable, but there’s a reason behind the candy-colored madness: tabulating the bill. Just like in an old-school dim sum house, the waitress counts up the number of dishes at the meal’s end.

Once we snapped out of the trance induced by all the revolving sushi and soothing J-Pop – aspiring artists straight from Tokyo we’re told – Gothamist grabbed a beige plate off the conveyor belt. After removing the plastic cover, we stared dumbfounded with no idea what kind of fish we picked. Turns out it was a tasty little portion of chuka hotate gunkan, or chopped scallop with spicy sauce, as we learned from the on-screen menu positioned next to our booth. In addition to taking orders for both hot and cold food, the computers provide a handy guide to Sakae’s extensive menu.

Incidentally, gunkan is the proper Japanese term for the type of sushi that consists of nori, wrapped around such ingredients as salmon roe. It translates roughly to battleship, a reference to the elongated, oval shape. One kind of gunkan we had little desire to grab off the belt was corn salad – a concoction of kernels, Japanese cucumber, crab stick and mayo. 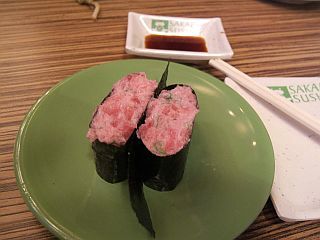 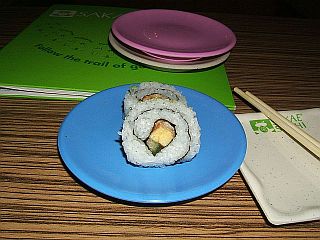 Instead we cast aside all worries about dangerously high mercury levels in tuna and opted for two pieces of creamy negitoro gunkan. Gothamist wrapped things up with unagi wasabiko maki: a roll of eel, egg and avocado rimmed with horseradish-flavored flying fish roe.