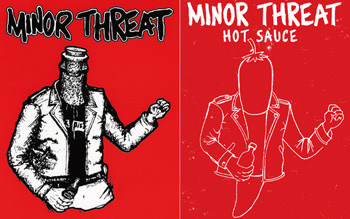 The Brooklyn-based Wheelhouse Pickles company has been selling a hot sauce named after the seminal D.C. hardcore band Minor Threat – and the band’s co-founder Ian MacKaye has given it his conditional blessings. The famously anti-commercial MacKaye, who not too long ago blasted Nike for ripping off a Minor Threat album design, was sent a sample of the sauce with a label similar to the Minor Threat illustration “Bottled Violence.” And after tasting the sauce, MacKaye unexpectedly agreed to let Wheelhouse use the name, though without the artwork: “I don't have an occasion to eat a lot of hot sauce, but I also thought the Minor Threat stuff was nice.”

Wheelhouse owner and MacKaye fan Jon Orren – who graciously showed Gothamist his company’s pickling process last year – was inspired to name the sauce after the band because the fruity, Caribbean-themed sauce is more mild than your average hot sauce. His dream is to see Minor Threat become a mainstream American condiment. (The sauce, not the band.) Made from a rare, mild breed of habanero peppers, Minor Threat is inspired by “the legendary West Indies’ mustard- and mango-based habanero sauces, only it mysteriously privileges the pepper's fruitiness over its notoriously overwhelming heat.”

We never went into trademark law like our parents wanted, but we’re wondering if MacKaye would have been able to stop Wheelhouse from using the name “Minor Threat” even if he wanted to. MacKaye is typically non-litigious – all the deals made with bands on his Dischord record label are done with a handshake, no contracts – and it’s doubtful that the “Minor Threat” name is trademarked. So without trademarks on his bands’ names, what’s stopping a line of FugaZip-Lock Bags?

We interviewed MacKaye, but he said nothing about hot sauce.