Despite a tenuous start last week, Empire Biscuit officially opened its doors, offering up the answer to your breakfast sandwich dreams. The shop specializes in freshly-made hot biscuits made with a multitude of middles and features a menu that runs from classic (bacon, egg, and cheese) to avant-garde (foie gras butter with preserved lemon and cabbage jam) that will change with the seasons. Sound good? It is good. Extremely good.

The restaurant is located on Avenue A between 12th and 13th streets and is a gorgeous medley of bright blonde woodwork and sunlight that stands out amongst Alphabet City's ubiquitous metal grates and scaffolding. Business on Sunday, the shop's first "reopened" day back, saw lines around the block and a 3 p.m. sell out, but when we arrived this morning the place was near-empty and co-owner Yonadav Tsuna was at the counter, happy to talk shop. 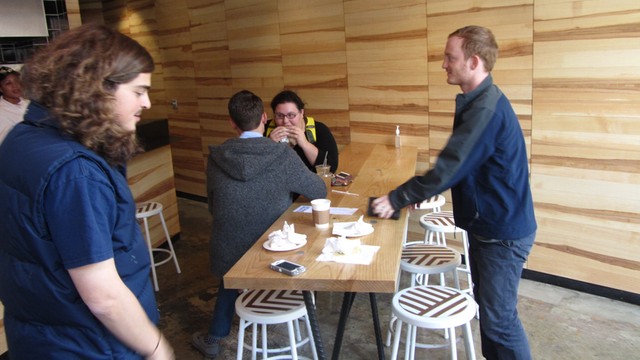 "We had some people here Saturday night crying outside," he said, when asked about the necessary closure late last week. Tsuna and his business partner Karl Wilder were inundated with so much early business that they were forced to lock up and hire additional staff in order to keep up with demand. "We're doing five times to ten times more than we thought we would," Tsuna said with a nervous grin. Their goal of being open 24/7 is also momentarily on hold but we're told that once ample staff has been hired and trained there will be biscuits from dusk 'til dawn.

And how are those biscuits, by the way? We sampled the flagship EMPIRE's Backyard Ham and Egg first and were floored by how quickly it arrived. Less than two minutes from ordering, a warm, buttered biscuit enclosing smoke-cured ham and a gorgeous fried egg was bestowed upon us. Texture-wise it's a delight and each bite is loaded with the ham's spicy-sweet happiness. Try one and you'll never want to hear the word "McMuffin" ever again. 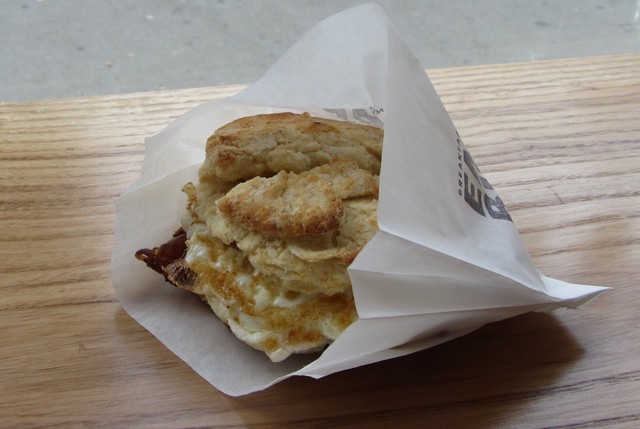 We also got our hands on one of the shop's recommended pairings of its house-made spreads. The Snuggah Boo biscuit features plum, prune and port jam over goat cheese and black pepper butter and is a flavor collision that's delicious, tart and decadent. Our only word of caution: these biscuits are meant to be consumed moments after leaving the kitchen, so dine in or close-by whenever possible to avoid dried-out biscuit sadness.

Wilder was also keen to let us sample a bit of the shop's fantastic house-made lamb belly bacon (right? RIGHT??), which he seasons with fenugreek and juniper. It was conceived as a means to offer Muslim and Jewish customers a meat option beyond the typically bland turkey substitute. Wilder may be on to something here, and he knows it. "I see franchising in the future," he said. "Not just here, but in the Middle East. Beirut, Dubai, Jerusalem."

Scott Heins is a freelance photo and video journalist based in New York City, and a frequent contributor to Gothamist + WNYC. His work often centers around labor rights, housing, and policing. In 2018-2019 he traveled to four states while covering a wave of public school teachers strikes, with work featured in The New York Times, The Intercept, Getty Images, Splinter, and Bloomberg Photos. Scott is a dues-paying member of the National Writers Union's Freelance Solidarity Project.