Emmy Squared Is Poised To Blow Up NYC's Pizza Scene

When a beloved pizza joint sees fit to expand, there's reason to rejoice, like the newly-minted LES outpost of Speedy Romeo, and Staten Island's Denino's taking a dip into Manhattan. The next in line for expansion is Emily, the darling Clinton Hill eatery that took the pizza—and burger—world by storm when it opened in 2014. With a few years experience under their belts, proprietors and pizza makers Matt and Emily Hyland are turning to the square pie, opening Emmy Squared tonight in Williamsburg.

The couple has found themselves a second home in the short-lived Bill Baker's space on Grand Street hugging Marcy Avenue and an entrance to the BQE. There, they're doing some seriously delicious Detroit-style-inspired pies, a departure from their dainty and delicious Neapolitan pies at the original location. Together with Paulie Gee's alum Lou Tomczak, they're turning out puffy, fluffy, crisp-around-the-edges offerings that are like pillows of heaven topped with sauce (or not). If the samples being passed around at friends and family prior to official opening are any indication, these bad boys are set to join the pizza pantheon alongside their brothers in shape at spots like L&B Spumoni Gardens, et. al. 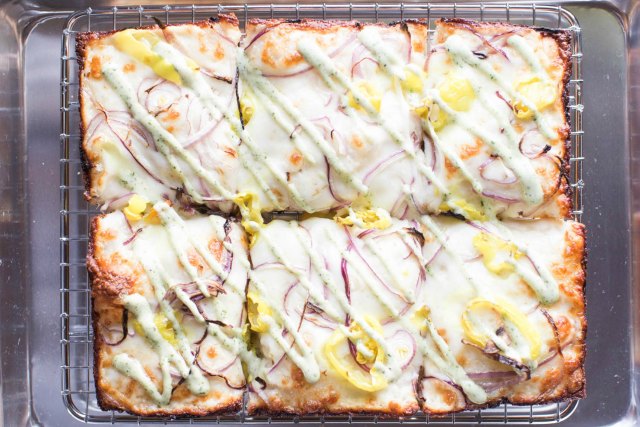 Their Margarita ($19) comes topped with melty burrata, a cold contrast to the hot, zesty sauce that's a fixture on the Classic ($14) and pepperoni-dense Roni Supreme ($17) as well. Less traditional offerings include The Emmy ($17), with mozzarella, banana peppers, red onions, a drizzle of ranch dressing and a side of sauce; the Hatchback ($17), made with green chiles from Zia Green Chile Company; and LaBrunier ($17), with spicy chicken, onions and more of that ranch.

As they did in Clinton Hill, the Hyland's aren't resting on pizza alone. Gotham Greens-fueled salads like the Queens Crisp ($12) with pecorino and dried cherries are the perfect foil to Crispy Cheddar Curds ($10) with two types of accompanying sauces. We also heard they're doing a "Burger Bar" (with accompanying alcohol bar) downstairs at some point soon, where they'll hopefully be serving their dope burger alongside sandwiches like the Meatball ($14) with provolone and tomato sauce on a pretzel bun and Chicken Parm ($14), two classic pizzeria staples. And just like the fav pizza joint from your youth, they're doing root beer on tap.