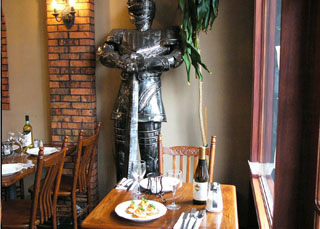 When most people think of ethnic cuisine in Queens the first thing that pops to mind is not Polish food. It’s more likely Korean, Indian, or Thai. Nevertheless there exists a pocket of Polish restaurants and groceries in the decidedly old school neighborhood of Maspeth.

One of the best places to sample hearty stick-to-your ribs fare as well as lighter Polish dishes is Krolewskie Jadlo, or “King’s Feast.” With all the pictures of Polish royalty and swords lining the walls plus three suits of armor, Krolewskie Jadlo bears a strong resemblance to the armor room at the Museum of Natural History.

The pierogies fall squarely into the category of hearty classic Polish dishes. They can be ordered either steamed or fried. Though why anyone would pass up the opportunity to have the six crispy crescents fried to perfection in bacon fat is a mystery to us. They’re filled with cheese, meat and cabbage and make for a perfect appetizer now we’re getting well into fall. 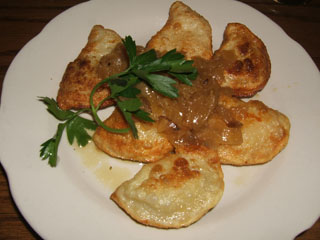 The pierogies are also featured in the Polish Plate a quadruple-play that also includes stuffed cabbage, kielbasa and potato pancakes. One of the best among the heavier entrees is a pork cutlet with hunter sauce. It consists of a thin pork cutlet that’s been fried in butter. It comes to the table awash in the darkish red sauce which is teeming with mushrooms and bits of meat, in case all that pork wasn’t enough. Krolewskie Jadlo does have some lighter items on offer including smoked salmon and several types of borscht. One of the best lighter dishes we tried was a whole trout in a yogurt dill sauce.

With an abundance of traditional Polish fare plus several surprises it's hard not to feel like a king when dining at Krolewskie Jadlo. Brooklynites will be pleased to know that they also have a location in Greenpoint.