Not heading to far away beaches or upstate lakes? No worries, the greatest city in the world is yours for the taking. Here are some local options if you're looking for a cheap way to eat and drink over the holiday weekend. 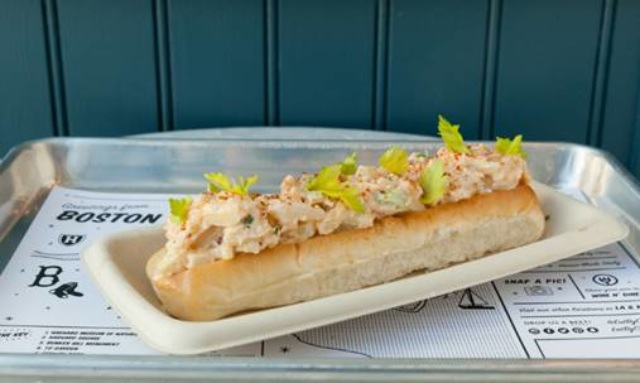 Try out a vegan lobster roll Rapidly expanding vegan chain by CHLOE tackles one of summer's hallmark dishes for Labor Day Weekend: the lobster roll. Friday through Monday at the SoHo location on Lafayette you can pick up a packaged picnic that contains a "lobster" roll—made with hearts of palm instead of lobster meat—seasoned with Old Bay, Veganaise, diced veggies and lemon juice. The picnic ($17) also contains air-baked fries, a push pop, and a lemonade. 240 Lafayette Street; eatbychloe.com

Eat some insects Entomophagy is the direction we should all be heading; just ask the billions who already eat bugs on the regular. Dip your toes in this weekend at the Brooklyn Bugs Festival taking place at three venues in Greenpoint and Williamsburg from September 1st to 3rd. Expect insectivore-friendly vendor markets, a VIP Bug Banquet, cocktail receptions, and speakers and panels discussing the benefits of entomophagy. Tickets vary in price, depending on tier; you can purchase them online. Multiple locations; brooklynbugs.com

Participate in a returning outdoor market The "fall" iteration of Mad. Sq. Eats returns Saturday for its month-long run adjacent to Madison Square Park. Hearty autumn eats courtesy of new vendors include the "fork-free" Chick'n Cone phenomenon; Daa! Dumplings, Russian dumplings (also served in a cone) in flavors like lamb & feta; and Trapizzino, the Roman bread pocket sandwiches that debuted in NYC earlier this year. There will also be salad. The Urbanspace Mad. Sq. Eats is located at the plaza between 24th and 25th Streets, where Fifth Avenue and Broadway intersect, and is open daily from 11:00 a.m. to 9:00 p.m. through September 29th 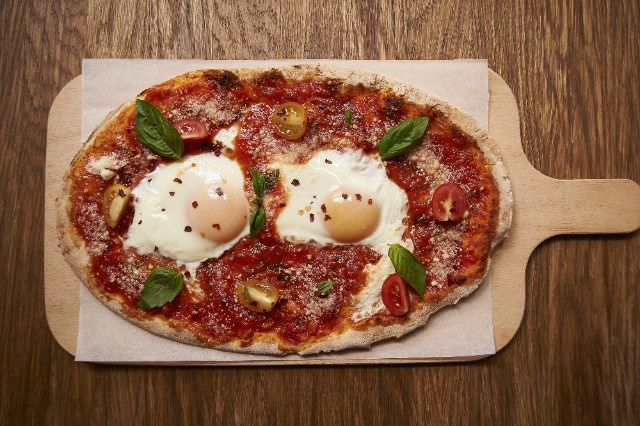 Pizza and Prosecco Enjoy three days of Italian brunching at Altesi Downtown in SoHo, which will extend brunch into the Monday holiday. On the menu: the Pizza al Sole ($16, pictured above) topped with a sunny-side up egg; Uova e Manzo ($21) aka steak and eggs; and a Carbonara pasta ($16) made with prosciutto, onions and organic eggs. Also on offer all weekend: $5 glasses of prosecco. 200 Spring Street, (212) 431-1212; altesinyc.com

Lobster and Beer FTW For the second (and possibly last) time this summer, the Hester Street Fair is throwing a Lobster & Beer party, an all-day lobster party from 11 a.m. to 6 p.m. with four special guests offering up their best lobster recipes. Burger and Lobster is serving a Seven Samurai Lobster Roll, Claw Daddy will have boiled lobster and grilled oysters, Lobster Joint will have lobsters, and DownEast Lobstah will sell lobster rolls and hush puppies. Other non-lobster and non-edible vendors will be on hand, plus beer and music. Hester and Essex Streets, Lower East Side; hesterstreetfair.com

Sunday Funday in Astoria Wine bar and restaurant DiWine, recognizing that many of us will not have to work on Monday, has extended its happy hour to include Sunday for this weekend. Stop by between 5 p.m. and 2 a.m for discounted beer ($5) and discounts on select cocktails ($8). 41-15 31st Avenue, Astoria, (718) 777.1355, diwineonline.com

Try a taco party on a rooftop April Bloomfield's Salvation Taco seizes the day with a Pre-Labor Day Party from 2 p.m. to 6 p.m. Taco and drink specials TBD—look for a signature cocktail, most likely made with either Fords Gin or Cana Brava—plus tunes courtesy of DJ Bryan Mette. 145 E 39th Street, (212) 865-5800; salvationtaco.com

Try a taco party in a speakeasy Tacos, tacos and more tacos because they're unlimited at Pinks in the East Village on Sunday. Beginning at 2 p.m., $30 buys you as many tacos as you care to eat, plus unlimited draft beer to boot. Remember: you've go Monday off. ::sunglasses emoji:: 242 E 10th Street, (646) 918-6231; pinks.nyc 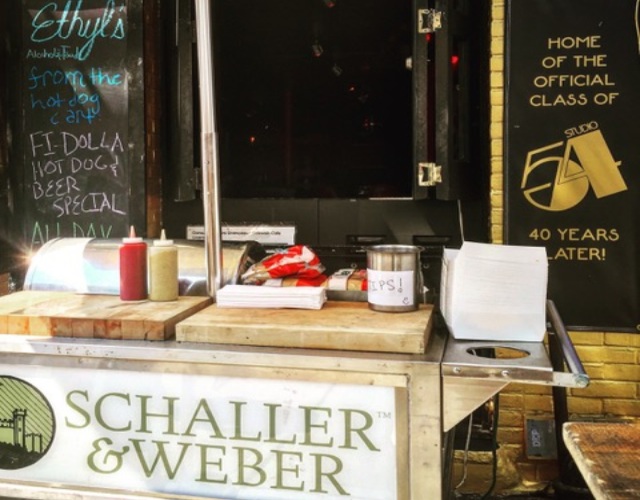 Rock Sausages UES joint Ethyl's Alcohol & Food partners with nearby Schaller & Weber to bring a sausage cart in front of the 2nd Avenue bar for the day. Beginning at 5 p.m., the sausage cart will serve all-beef hardwood smoked German hot dogs on Martin's potato buns with the option to add mustard or sauerkraut. Combine that with one of Ethyl's beers for just $5. Throughout the day 'til 4 a.m. there'll be live music and DJs. 1629 2nd Avenue, (212) 300-4132; ethylsnyc.com

Party with some (adoptable!) kitties Lower East Side cat cafe Koneko hosts another Kiki Tiki Party in their indoor and outdoor cattery. The event ($50 per person) includes all-you-can-eat menu of Hawaiian eats including pork sliders with grilled pineapple, seafood poke, fresh tropical fruit, and more. Reservations also include unlimited beer and spiked punch but most importantly: cuddles with the resident kitties, all of whom are looking for furever homes. 26 Clinton Street, (646) 370-5699; konekonyc.com 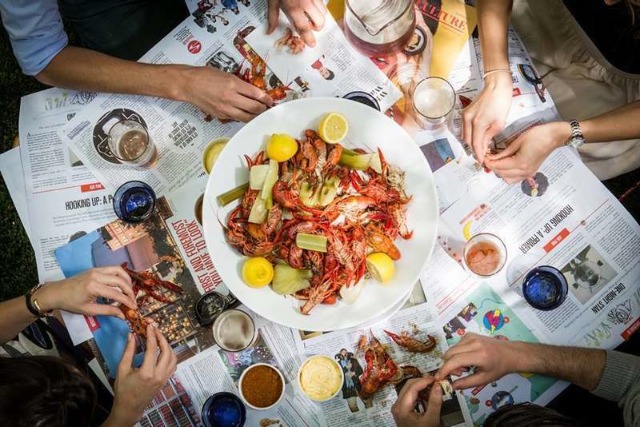 Get your fingers dirty Spend the afternoon peeling shrimp and sucking the good stuff out of their heads at a Low Country Boil at The Standard East Village. The hotel is offering a three course meal (10 a.m. to 3 p.m.) of BBQ ribs and hush puppies, followed by head-on shrimp with corn, potatoes and smoked sausage, concluded by banana cream pie with chocolate sauce and Nilla Wafers. Buckets (6 beers) of Standard Brauhaus will be $30, with frozen drinks running $8. Reservations (the meal is $62 per person) are available over the phone at (212) 228-3344 or by emailing reservations@narcissarestaurant.com.

Free hot dogs End of summer (well, spiritual end) means last call on hot dogs and Handcraft Kitchen & Cocktails is grilling up gratis dogs to anyone who stops by to order a beer. Draft beers including Ithaca Flower Power, Barrier Beech Street and Grimm Cloudbusting are priced between $7 and $9. The Kips Bay bar-restaurant also offers this special on Fridays before folks head out of town, but the spot will be closed on Saturday and Sunday. 367 3rd Avenue, (212) 689-3000; handcraftnyc.com

Try out some kangaroo Do they celebrate Labor Day in Australia? They do, but it's complicated. Regardless, Burke & Wills Australian Bistro treats New Yorkers to a taste from down under with an all-day brunch with specials on Monday. Kangaroo Pie Floater—a "traditional Aussie hangover cure with a kangaroo meat pie in pea soup"—will be on offer, along with more accessible dishes like steak and eggs and an avocado smash. Happy hour from noon til 8 p.m. means $1 Blue Point oysters and 2-for-1 drinks at the bar. 226 W 79th Street, (646) 823-9251; burkeandwillsny.com