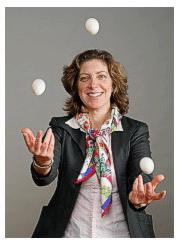 Last week, City Councilman Tony Avella introduced a resolution to urge the state senate to outlaw the force-feeding of ducks and geese to produce foie gras. A bill has been on the back burners in Albany, and Avella hopes that his resolution will move things forward. Ariane Daugin, head of D'Artagnan, the nation's leading foie gras purveyor, had a some strong opinions to share on the matter. Read more about her opposition (and see the Humane Society's video of the duck and geese) here.

What do you think of Councilman Avella's recent resolution to ban the practice of force-feeding geese to produce foie gras? It bothers me to see American leaders take actions like this without getting all the information about the issues. Recently, well-funded vegetarian activists tried to convince 45 legislators in Maryland to back a similar bill. We took those legislators out to our farms, had veterinarians and farmers testify at the hearing, and the ban was voted down.

We did the same in Chicago, where they originally passed the law without knowing anything about foie gras. When we gave them all the information, they reversed the law.

Why is this issue in the spotlight now? Avella is trying to draw support for an old bill, and let's be honest, get some attention for his mayoral campaign. Suddenly, we are all talking about him. But he is sadly misinformed-and is misleading the public.

It seems obvious, but bears mentioning: ducks aren't built the same as humans. He keeps talking about the birds' "mouths" being hurt by the feeding tube; he is basically anthropomorphizing. Birds have beaks, not mouths, and the tube does not hurt them. When a mother bird wants to show her love for her baby bird, she puts her beak down as far as possible into her baby's neck (esophagus) and then pukes in it -- this is how she feeds it.

The scientific facts about duck anatomy are available, so I won't belabor the point. What I'd like to say to Avella is, "go visit a good farm and then we can talk -- don't listen to those whose agenda is to convert the world to vegetarianism; get the facts."

There are two farms in New York that produce approximately 80% of foie gras in the U.S. How would this ban likely impact Hudson Valley Foie Gras, the farm from which you obtain your foie gras? Frankly, I don't believe the law will go anywhere -- if it does, then 500 jobs in upstate NY would disappear.

Assemblyman Michael Benjamin, an original sponsor of the bill to ban foie gras in New York state, was just quoted as saying, "I've had a change of heart." He went to one of the farms and realized that the ducks are not in pain, or mistreated, and he no longer supports his own bill, which Avella wants to revive.

Do you think a ban like this would ultimately have an impact on the level of foie gras consumption in the U.S.? Yes, a POSITIVE one. In Chicago, when there was a ban, the consumption actually increased.