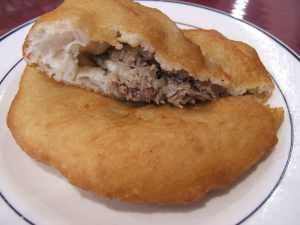 Rego Park and Forest Hills have been home to Uzbeki immigrants for so long that many residents and outsiders now refer to the area by the collective name Rego Parkistan. By our count there are at least a half dozen kosher kebab joints between the Boulevard of Death and 108 Street. All of these spots feature flat swordlike skewers upon which have been impaled meat, fish and the occasional vegetable, as well as such "national dishes" as plov, a heartier take on pilaf. Gothamist recently visited Zhemchuzhina, one of the newer entries in this somewhat crowded field.

The restaurant once housed Hot Samsa, a shop that churned out samsas, savory trianguar pies filled with ground lamb and baked in a tandoori oven. Zhemchuzhina translates to pearl and the maroon and beige dining room carries on the gemological theme. Pictures of precious or semiprecious stones line the walls designating each table. Not feeling quite classy enough to sit at the diamond table, we took our place at the humbler rose quartz. 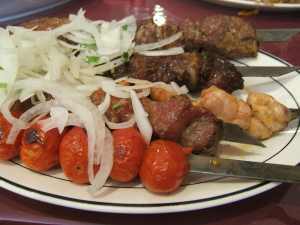 We decided to skip the samsa, even though they're still baked in the same ancient looking tandoor oven used by Hot Samsa. Something about the fried knish with meat compelled us to get one. Fried knish with meat is clearly a mistranslation. The golden-brown pillow contains no potato whatsoever and bears no resemblance to that classic New York snack. As you can see, it's a deep-fried meat pie chock-full of ground lamb and onion. Gothamist never found out the proper name, but that doesn't matter. It's delicious and gloriously greasy for two reasons: the meat's generous fat content and the magic of deep frying.

Naturally a contingency of kebabs were had, including skirt steak, lamb, lamb ribs and cherry tomatoes. All were quite good, especially the lamb ribs, which glistened with the rich ovine fat that Uzbekis hold so dear. But the best item by far was the khorovak, or veal sweatbreads. The creamy nuggets of meat had just the right amount of crispiness on their exterior surface. 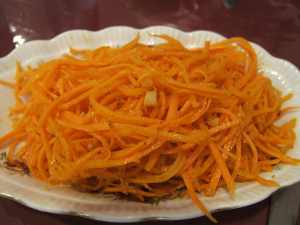 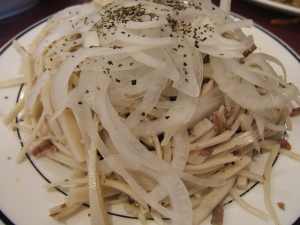 In order to balance out this meatfest and make a token effort to moderate our cholesterol, we ordered a bracing salad of shredded carrots dressed with garlic and pepper. We also tried Narin (above, right). It's one of the stranger salads we've come across in any cuisine, Uzbek or otherwise. It consists of a tangled mound of shredded dough and julienned beef tossed with coriander and pepper topped with slices of raw onion. Gothamist uses the word dough because at first we thought the shreds of dough were raw due to their slightly chewy consistency. We were a tad disappointed to learn that back home this dish is often made with horse meat. Who knows? Maybe horse flesh would have been tastier than the beef version.