5 Ways To Eat Through Your Weekend

Since the show began in 2006, contestants on Top Chef have been opening up all over the city; the latest comes from Season 5's Jeffrey McInnis and Season 11's Janine Booth, who open their restaurant Root & Bone sometime in early 2014. For a preview of their Southern-flecked menu, the duo host pop up dinners on Friday and Saturday with seatings at 7 p.m. and 9 p.m. Snack on creamy Shimp n' Grits with beer-crusted red royal shrimp, Tobasco-spiced ham with baby onions and stone ground grits; Australian Rack of Lamb in a carrot BBQ sauce; and a House-Made Charcuterie Board with spicy goat "Slim Jims," smoked duck ham, wild boar Terrine and marinated cheddar jar. The fun goes down at newly opened Greenpoint eatery The Brew Inn; tickets are $65.

Everyone's favorite cruelty-free eating and shopping event returns to the Pine Box Rock Shop in East Williamsburg this Saturday. The latest Vegan Shop-Up—dubbed "HEY THANKS!" in honor of the season—takes over the Bushwick space, bringing a veritable smorgasbord of vegan treats from desserts to tomato sauce to skin care products. The full lineup includes Heirloom Eatery, who'll have a full Thanksgiving spread of "turkey," gravy, sides and pumpkin cupcakes; sweet treats like pear frangipane from Sweet Maresa; Ethiopian dishes from Bunna Cafe; and tons of delicious dairy-free cheese from Treeline. The fun begins at noon and runs until 6 p.m.; admission is free. 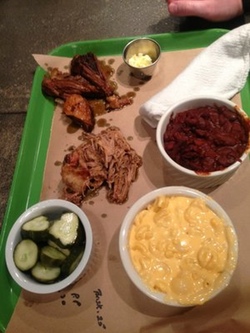 If you don't have a problem with meat, consider attending The Strand Smokehouse's 1st Birthday Party on Sunday, which runs from 4 p.m. to midnight. The Astoria meat mecca knows any good party has plenty of food and booze to feed their guests; when they're not giving it away for free, they're selling it on the cheap. Arrive early for brunch dishes like Pot Pie and a Hash Plate, or just nosh on smokey burnt ends and pulled pork. Besides all the feasting, they've got a dope lineup of live music throughout the day, including performances by 2nd Ave Mountain Boys, Laura Cantrell, Dave the Spazz and Phast Phreddie the Booagloo Omnibus.

French wines are heralded as some of the best in the world and the island of Corsica boasts several varietals that don't have the name recognition the Bordeaux and Burgandy's get. Chef Sean Rembold of the Wythe Hotel's Reynard hosts a six course, Corsican-inspired dinner paired with wines from the region as a nod to Kermit Lynch's seminal book Adventures on the Wine Route. Learn a little bit about the many grape varieties found on the island in its many mountain regions. The Sunday dinner costs $120 per person, which includes the meal, all wine pairings, gratuity and tax.

Get crabs—legs, that is—at Crab Spot's Snow Crab Festival this Sunday, featuring All-You-Can-Eat snow crab legs with All-You-Can-Drink craft beer to boot. They're offering two sessions to get down, get dirty with as many hot legs as you can stand, plus corn, potatoes and even some dessert. When you're not chowing down on crustacean, take in some live music and other activities but or just admire the chintzy plastic lobsters before stuffing your face some more. Tickets for each 2.5 hour seating are $70 for adults, $30 for kids.