After 32 years, much loved Upper West Side eatery Popover Cafe will raise its final roll on January 5th. West Side Rag broke the news yesterday, reporting that signage in the window indicated the restaurant had lost its lease and would shutter just after the new years. 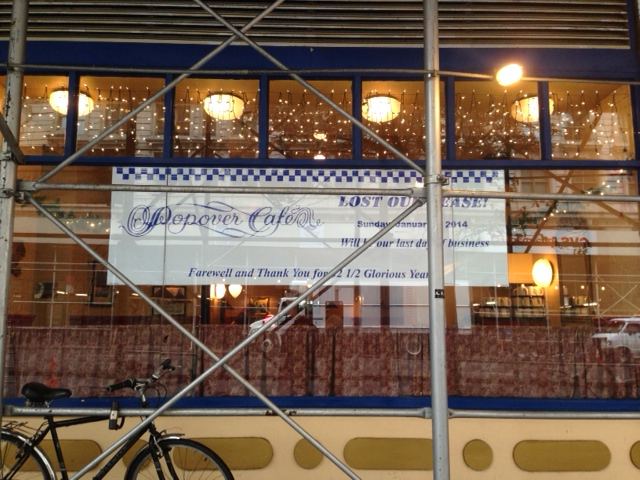 Opened as a tiny eight-table, no-oven operation in 1981 by founder Carol Baer, the restaurant served neighborhood folk looking for a simple meal made with care. Eventually, the restaurant grew to seat 100 and locals and visitors alike returned often for the lovingly made dishes and airy popovers served alongside.

The restaurant had been a holdout in the increasing chain invasion currently unfolding in the neighborhood, which recently claimed the lives of institutions like Big Nicks. Despite rising costs, things seemed sturdy. Unfortunately, Baer and her husband had the great misfortunate to trust in swindler Bernie Madoff, who robbed them of their life savings.

We spoke with Baer this afternoon, who revealed she'd actually been looking for a buyer so she could retire sometime in the near future when the troubles unfolded. "We had a six month process that was very, very close to closing—within days—within days—and the buyer backed out saying that the landlord was too difficult to deal with," she explained. "It was such an onerous process." Ideally, she's hoping someone will stand up and decide they want to continue the cafe, if only in name. "Even small Popover Cafes all over the country would be great, that's always been my dream."

Baer also revealed the new tenant who'll take over the space when she vacates next year. "It's going to be a 24-hour, round the clock bakery and bistro." Hmm, where have we heard that before? "Wait until the co-op hears about that, it's going to be a shitstorm," Baer mused. "But that's not my problem anymore!"