In 1980 Dolly Parton was on the cover of Rolling Stone, preparing for her first movie role (9 To 5), and splitting her time between the country and the city. This CBS segment for "Country People" with Huell Howser (RIP) aired on CBS in 1980, and was shot while she was preparing for her big screen debut. In it, Parton reads from the script, plays a tune, gives a tour of her 5th Avenue penthouse apartment, and talks New York City:

"I love it up here. I don't get here all that often, but it's a good place for me to work, I write a lot of songs up here. Looking out over Central Park there's just that little bit of simplicity, it almost looks like a country scene, and then to kind of look out and see all the buildings and the high rises. It's like the country and the city, just this little part here, and I get inspired."

Not bad, but she still preferred the country... 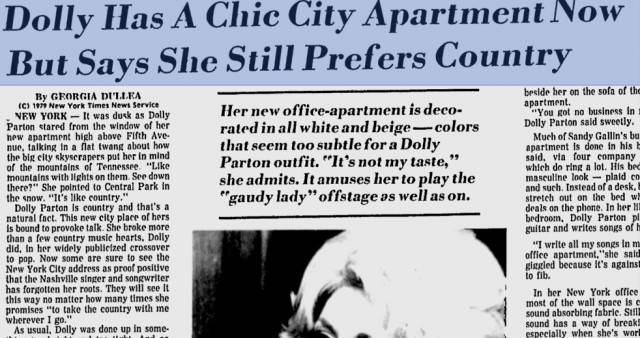 Maybe because you can make more noise there—in 1979 she told one paper, "We play music too loud and we'll probably get thrown out that window. We got neighbors and I respect 'em but sometimes I forget, like when I'm playin' on my new album and thinkin', we need horn in that piece or we need to put string on this, and I turn it up so loud I can hear all I'm supposed to and then all of a sudden the neighbors don't particularly want horns." To her credit, she did try to help by putting "sound absorbing fabric" on all of the walls.