UPDATED: Those Goats In DUMBO Just Got Loaded Into A Halal Truck :(

Last night some goats were released into a temporary pasture on John Street in DUMBO, where they basked in the setting sun for perhaps the last time. The goats got to graze at John Street Pasture today, where visitors were allowed to pet them, and they were supposed to be there until 6 p.m. tonight. But alas, they were just spotted being herded into this Halal Truck.

We contacted organizers involved with the pasture (which was artist Andrea Reynosa's contribution to this FOODshed show), and will update when we hear back. It's unclear what their fate is, but the truck bears the logo for Madani Halal, which lists goats as one of their products, boasting that they are grass fed to give them a more "earthy and organic flavor."

A tipster tells us that one goat managed to escape when The Man tried to load him into the van and was subsequently spotted running down the streets of DUMBO. 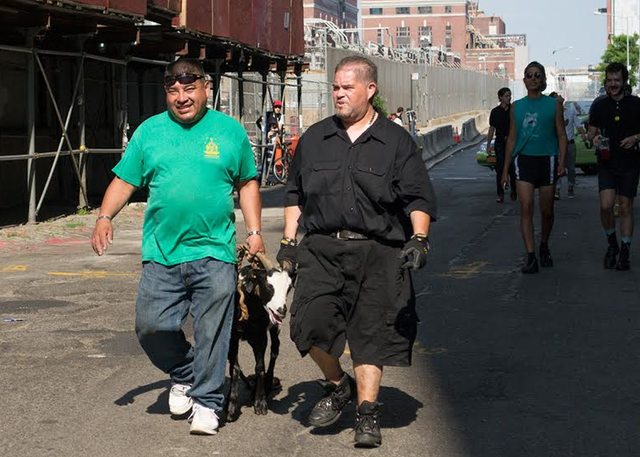 We dropped by the site, where organizers refused to say what was next for the goats. We also spoke to some disappointed locals who had come by to see them. Jamie Pessin was there with her 5-year-old son Noah, and told us, "This is very sad. [To her 5-year-old son Noah] I promised you goats and there are no goats! Somebody posted only 20 minutes ago that there would be goats here until 6 o'clock!" [Ahem.] They're probably already in Queens:

GOOD UPDATE! 7:45 p.m.: Brooklyn Grange has sent us this statement: “All goats, even dairy goats, are eventually slaughtered for meat production. This is the nature of our food system and one of the issues that this project set out to highlight. The 5 goats in our installation are being donated to a local educational farm, and will continue to live a happy life at pasture for years to come. Madani Halal has been a great partner on this project—they helped source and transport the goats for us, and they are an excellent local business specializing in sustainable meat distribution and processing here in New York City." So... they've got a few more years.

UPDATE, 7/11: Some more info on the fate of the goats can be found here.