[VITAL CELEBRITY TROUBLE UPDATE BELOW] Mercurial and admitted girlfriend beater Chris Brown Tweeted a photograph of his gashed chin early this morning, saying, "How u party wit rich n**** that hate? Lol... Throwing bottles like girls? #shameonya!" Then it was deleted... and now it's suggested that his entourage and Drake's entourage got into a bottle attack at WIP in Soho. And it may have been over Rihanna! Because when dudes fight, it's gotta be over a girl.

According to TMZ, it "confirmed with the NYPD that the two singers' crews got into a fight at WIP nightclub -- 5 people were injured in the melee. NYPD arrived on the scene after receiving a call between 4 and 5am. Chris and Drake were not present when cops arrived." No one there had critical injuries ("just bumps, bruises and lacerations") and no one was arrested.

Rihanna had an infamous and tumultuous relationship with Brown and she later dated Drake briefly. Recently, Brown was seen with Rihanna's relatives at a NYC club and Rihanna allegedly wants Brown to dump his girlfriend.

Update 1:04 p.m.: CBS 2 reports that police want to question both Brown and Drake about the brawl. That could be complicated for Drake, because he's scheduled to perform at SPAC upstate tonight. Brown, you may recall, is also on probation after pleading guilty to assaulting Rihanna at a pre-Grammy party in 2009. And though the injuries were minor, they were serious enough that four women and one man were taken to the hospital to treat their lacerations.

Update 2:07 p.m.: A celebrity image service says this right here is a photo of Chris Brown's blood soaked car, seen parked outside his hotel in New York. (Up next: EXCLUSIVE photos of crumpled tissues that someone who saw Brown in concert once MAY have recently used to blow his nose.) 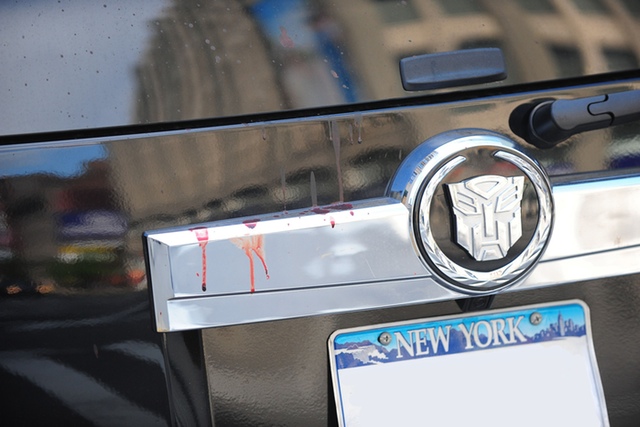