There are plenty of bars in the city with dance floors and party nights to liven up the beer-and-shot special monotony—Beauty Bar in the East Village, Fontana's on the Lower East Side and Bushwick newcomer Bossa Nova Civic Club, to name a few. But sometimes, you just want to get gussied up and go to a real live CLUB CLUB CLUB CLUB, with velvet ropes, cover charges, fellows "posting up" and techno and dancers galore. Though some of these clubs cater a bit too closely to the Bridge & Tunnel and cliched crowd to bear, there are still plenty of dance spots worthy of a night on the town. Here are a few of our favorites; as always, list yours in the comments. 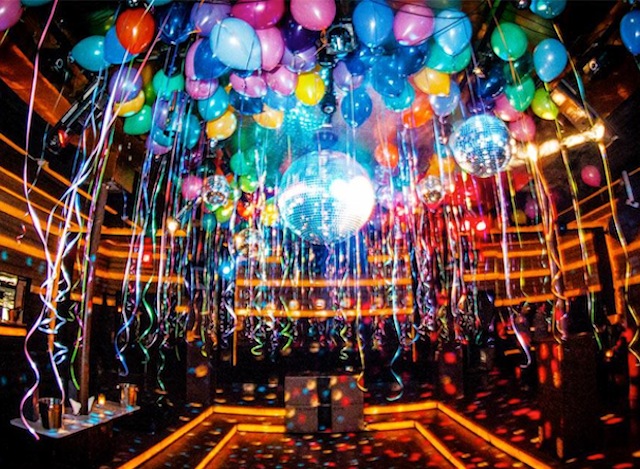 Cielo's not as big as some of its fellow convocations of fist-pumping glory, but it's also one of the best of the bunch, hosting rocking DJs and dance nights that put Pacha and Marquee to shame. Cielo's music crew mostly stick with the techno stuff, but even non-Electric Daisy enthusiasts can get into the party. Some of the city's most masterful spinners set up shop here, like resident DJ Francois K and ROOTS party's Blaze [Kevin Hedge]. Do note that cover fees can climb as high as $25, but you can sometimes sneak on a guest list through the club's Facebook page; check it on the day of your party of choice for discounts and lists.

Cielo is located at 18 Little West 12th Street between 9th Ave and Washington Street in the Meatpacking District (212-645-5700, cieloclub.com). 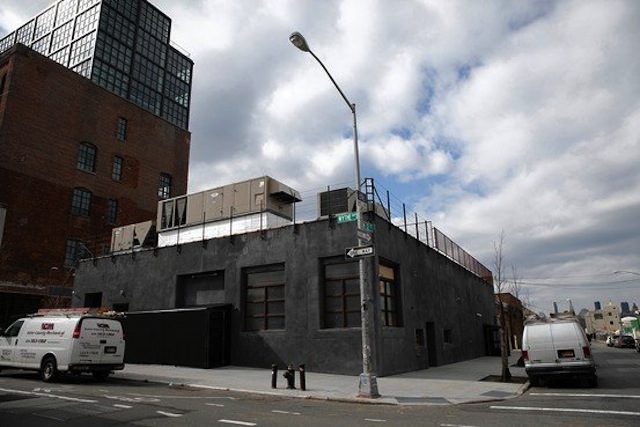 We gave this Wythe Ave venue grief when it was announced earlier this year, but if any bonafide CLUB CLUB CLUB CLUB had to be in Williamsburg, at least it's this one. Output boasts a killer Funktion One soundsystem, a rarity even in New York, which sends sick beats reverberating from the likes of DJs Cassy, Danny Tenaglia, Matthew Dear and Ben Klock, who spin the kind of music that'll keep you going all night long. The club's crowd is pretty laid back for a big city club, and there's no douche-y bottle service or VIP section to contend with (though do expect a $15-$30 cover); Output's two floors are all about the music and the dancing, and no one will knock you out of your zone once you're deep into it.

Output is located at 74 Wythe Ave between North 11th and 12th Street in Williamsburg, Brooklyn (outputclub.com). 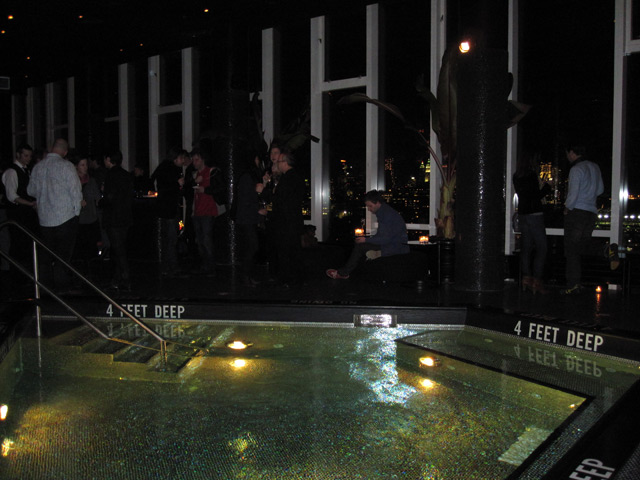 This hotspot at the Standard High Line might not be as hot [NSFW] as it was, say, fourteen months ago; time does do a number on New York nightlife, after all. But nights at Le Bain are still characterized by long lines, picky door staff and dressed-to-the-nines kids, which might not be your thing, but can at least make for an entertaining evening every once in a while. Music-wise, Le Bain sticks to no specific repertoire, and you can end up grooving to everything from house to rap to swagged-up indie rock. Though do keep your moves contained, kids, lest you fall into the pool sitting beside the dance floor.

Best of all, Le Bain boasts spectacular views of Manhattan and the Hudson River. When you need a breather, head upstairs to the roof bar for refreshment and watch the city twinkle. 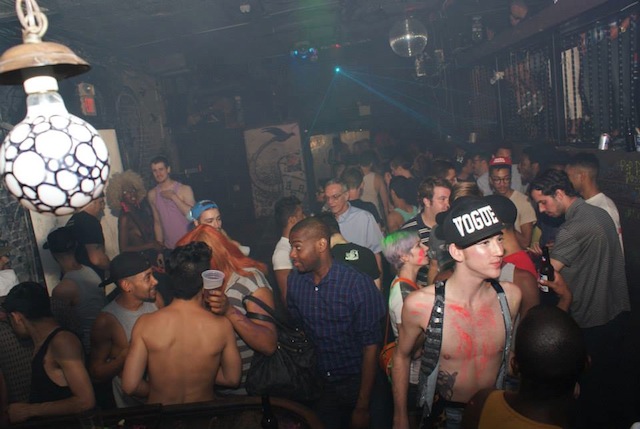 Nights at Sugarland are as they should be—hot, sweaty and packed to the gills with throngs of hip, boogieing boys. A $5 cover will get you in even when it's busy, there's rarely if ever a line to get in and drinks are far cheaper than the ones at clubs over on the Big Island. There's not a lot of techno here, and music ranges from campy '80s hits to the contemporary top-40 stuff, but everyone gets sloppy and into it all at once. There's also a sweet deck for cigarette breaks out back, which is a nice respite after spending an hour or two slammed against the club's brick walls, or a million other bodies. 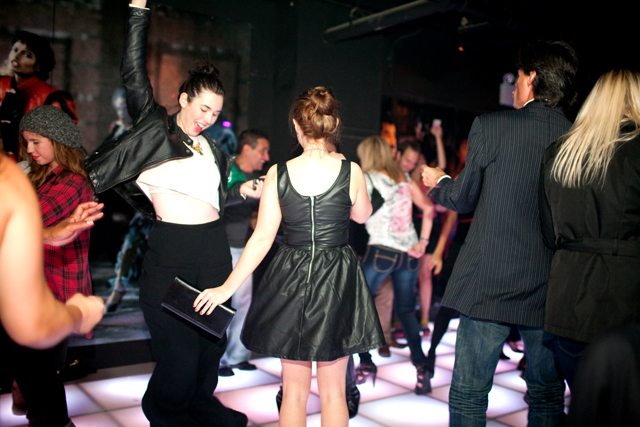 Best Chance Of Spotting Debbie Gibson While On The Dance Floor: CULTURE CLUB

It makes sense that former '80s teen pop queen Debbie Gibson would throw her hat in the ring to resurrect this '70s, '80s and '90s-themed club, teaming up with the owners as "brand ambassador." And boy we're glad she did, as since the club reopened in late 2011, it's been throwing awesome nostalgia-packed soirees at its multi-floor Midtown space. The music is spectacularly throwback-worthy, with all the '80s pop, New Wave, '90s grunge and old school hip hop you can handle in one night.

Even the decor is a sendup to the Age of Nintendo; the club is lined with neon (and Pac-Man!) lights and filled to the brim with vintage memorabilia, like posters from Gibson's old tours and the Footloose sign. Expect to pay a hefty cover ($25) on average, and pregame heavily if you're looking to get buzzed, because drinks are on the pricy side. 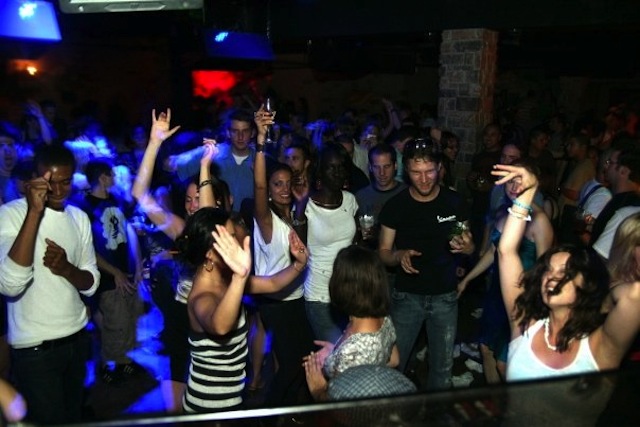 This subterranean Greenwich Village club is the longest running underground club of its kind and a mecca for fans of deep house and techno, throwing raucous dance fests that start late and run into the wee, wee hours of the morning. Their Libation party—held on the 2nd and fourth Thursday of every month—and nights hosted by popular promoters like Verboten are particularly popular, but if you wander in almost any night of the week, you're sure to get your groove on. Just be aware that the space is unmarked, and that parties start LATE; no one will be there before 1 a.m. No one. 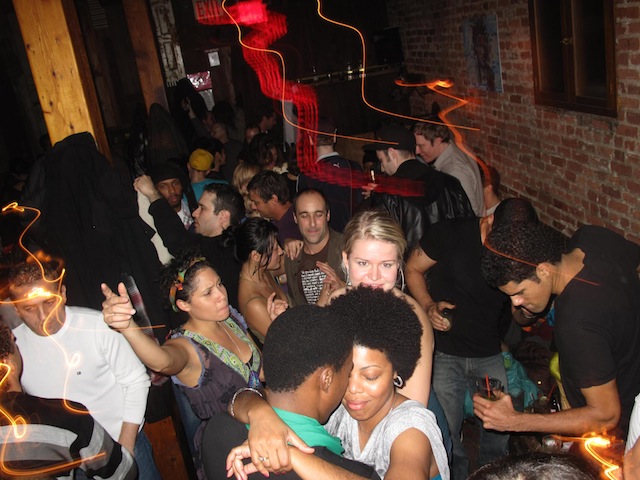 Best Dance Club With A Hammock And Cocktails In Coconuts: BEMBE

This Williamsburg spot edges a little closer towards bar-with-a-dance-floor territory than some of the aforementioned clubs, but don't let the crowd of drinkers fool you—Bembe is a dance club at heart, and a culturally-diverse one at that. DJs and live bands roll out sets chock full of salsa, meringue and samba, not to mention rumba, reggaeton, calypso and a smattering of old school hip-hop. If you're female, you can usually breeze in free of charge (fellas, expect a $5-$10 cover on busy nights) and the whole scene feels fairly Miami-inspired, with mojitos and coconut drinks that COME IN REAL COCONUTS available for post-dance resuscitation.