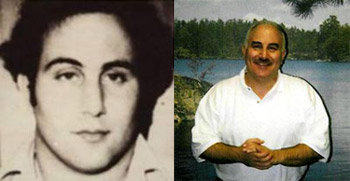 "Hello from the gutters of N.Y.C., which are filled with dog manure, vomit, stale wine, urine, and blood," these were the opening lines in a letter written by David Berkowitz to columnist Jimmy Breslin thirty years ago.

It seems Berkowitz has the writing bug again, as last week amNewYork received a two-page letter from the one and only Son of Sam. This one postmarked from the Sullivan Correctional Facility in Fallsburg, NY - where he is serving six life sentences.

The letter was apparently in response to an interview request, as he begins declining and saying he'd like to put the past behind him. He continues on to say: "I am deeply sorry for the pain and grief I have brought to many families through my criminal acts. I would give my own life if I could undo the tragic past." It was typed, and his real name was signed in pen - a new signature since the 1977 letter he sent to Captain Joseph Borrelli signed: "Yours in murder - Mr. Monster". The two pages are posted here and here, but the images are too small to read and amNewYork hasn't publish the text in its entirety anywhere.

To get more insight, prisoner No. 78A1976 does keep an online journal on his website www.ariseandshine.org, where he's apologized and recapped his personal timeline, stating:

I got out of the service in 1974 to start life again as a civilian. All my friends that I knew before had either married or moved away. So I found myself alone and living in New York City.

In 1975, however, I met some guys at a party who were, I later found out, heavily involved in the occult. I had always been fascinated with witchcraft, satanism, and occult things since I was a child. When I was growing up I watched countless horror and satanic movies, one of which was Rosemary’s Baby. That movie in particular totally captivated my mind.

Creepy. However he claims to have moved past all that, and back in his letter to amNewYork he writes about his prayers for those close to the victims in the Newark shooting and also voices his criticisms about America becoming a place of crime and bloodshed. An expert the paper talks to states that "denouncing violence is merely a ploy by Berkowitz, 54, to retain the public attention he so craves. Part of a killer's needs are satisfied just by reading about himself in the press. It's not the same as being out there and killing, but in some form Berkowitz is being gratified by reliving that violence at a distance."

Well, this summer was supposed to be a look-back at the Summer of Love, but so far it's all been about the Summer of Sam. So either he's right and the country is crime-minded, or he's satisfied knowing that documentaries like NY77 are introducing him to a whole new generation.