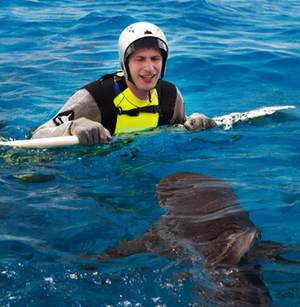 Andy Samberg has been tapped to host the 24th annual Shark Week (airing on Discovery starting July 31st), which has become a nationwide obsession over the years. Is getting a young, hip, celeb host a little too much though—has Shark Week now jumped the shark? (Apologies.)

According to EW, Samberg will become the Chief Shark Officer, and he told the site about any reservations he had accepting the new career challenge: "I had reservations at the restaurant of destiny. It has very little to do with me on the surface, which to me was a perfect sign that I should do it. Everyone loves Shark Week. I love Shark Week. I was just so flattered. The pitch was that I would get to fly to the Bahamas and literally swim with sharks, and I was thinking there’s no way I would ever have the balls to do that on my own, so I went for it.” Though he jokes that he did suggest just Photoshopping the sharks in, noting, however, that they're "purists over at Discovery."

Samberg won't be doing any Lonely Island-esque songs for his stint on Shark Week, but he will have his own shark special coming out on August 4th, also on Discovery. And this is as good a time as any to revisit the greatest summer movie of all time... especially since it was released on this day back in 1975!