Rocks on the Auction Block 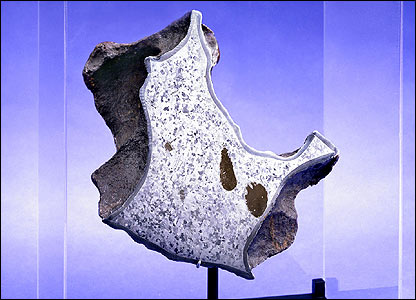 The Willamette Meteorite, originally from Oregon but residing at the American Museum of Natural History since 1908, was sent to auction Sunday (well, 30 lbs of its 15.5 tons was). How much did it, and another famous meteorite (the Brenham Main Mass), get when they took their place on the auction block? Zero, zilch...nada. Though WCBS reports that "an ordinary metal mailbox zapped by a falling space rock in 1984 was sold for the unearthly price of nearly $83,000."

Perhaps the sellers expectations were set a little too sky high, with the Willamette expected to take in $1.3 million! The bidding ended at a mere $300,000 when it was withdrawn from the auction. The owner, Darryl Pitt (who landed the rock through a trade in 1998), isn't sweating the low bidding and says there are a lot of prospective buyers lined up. Meanwhile the Clackamas tribe, who claim the meteorite is a sacred object belonging to them, has objected to the auction -- something Pitt wouldn't comment on.