While the annual exodus to leave the city started this morning, thousands of people were packed on Upper West Side streets to catch sight of the Macy's Thanksgiving Day Parade balloon inflation.

Onlookers were funneled to the blocks surrounding the American Museum of Natural History, making their way to 77th Street, where Thomas the Tank Engine, Hello Kitty, Red Mighty Morphin Power Ranger, Felix the Cat, Pikachu, Trixie (an adorable new dog balloon), Wiggleworm, Charlie Brown and more were being filled with helium. Then, at West 81st Street, the Elf on the Shelf, Spongebob Squareparents, the Sinclair Oil dinosaur, the Pillsbury Doughboy, Scrat from Ice Age and another new balloon, one with characters from Trolls.

John Piper, Vice President of Macy's Design Studio, was pleased with the weather—"it's only getting better"—as he surveyed the action. The 150 members of Macy's Inflation Team have been on the Upper West Side since the morning, working to fill the 16 giant character balloons and 27 novelty/ornament balloons, balloonicles and trycaloons. And they'll be working during tomorrow morning's parade, too: Piper assigns them to work in some capacity with the balloon that they helped fill, as pilot or co-pilot, as drivers for the vehicles under the balloons, etc., "That way, if there are any issues, they can address them right there." 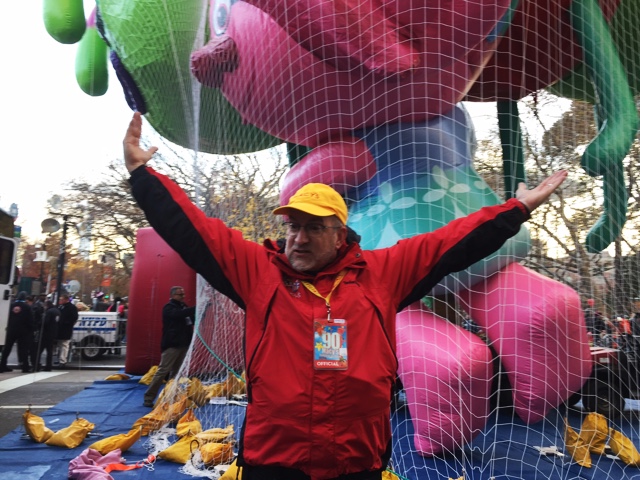 My daughter wondered why the new Trolls balloon features an oversized version of Mr. Dinkles, an adorable but tiny pet worm in the movie (Trolls Poppy, Branch and Guy Diamond are hanging onto him). Piper explained that was the magic of the parade, "We take things that are really little and make them ENORMOUS!" He also revealed that it was a particularly challenging balloon, since there were four characters to incorporate.