Photos: Jedis, Droids And The Dark Side Invade Times Square

The seventh installment in what appears to be an inexhaustible saga doesn't hit theaters until December 17th, but true nerds can get their galaxy-far-far-away fix now with Star Wars and the Power of Costume, which opened yesterday at Discovery Times Square.

The traveling Smithsonian exhibition offers some 100 original costumes and artifacts from all seven movies. Everything on display—from the blasters and lightsabers to the Jedi robes, Stormtrooper armor, and Senate gowns—were actually used during filming. And they look it! One of the cool things about the show is how battered some of this stuff is, or even cheesy, like the "wires" on C3PO. 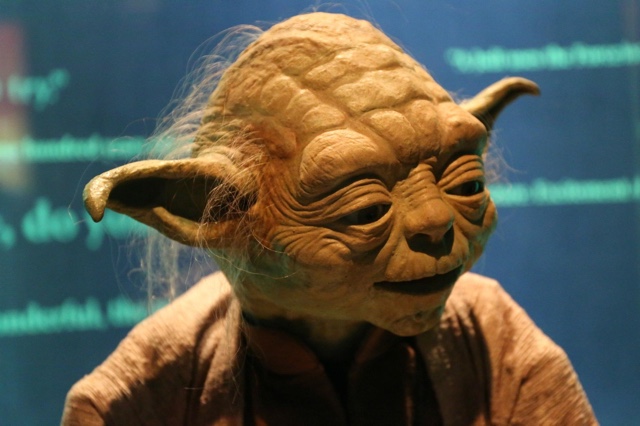 It's all here: the droids, Han Solo in carbonite, Yoda and Vader, Sith Lords, Bobba Fett, Chewie being all "awwwooorraaahh", X-Wing and TIE Fighter pilots, Leia's bikini, Tusken Raiders, a bunch of things I don't remember from the prequels... really, this is a deep and rich collection, with more than a dozen well-designed galleries to wander through. There's even a fun interactive game at the end, one of those "mirrors" that makes it look like you're Darth Vader dancing around. 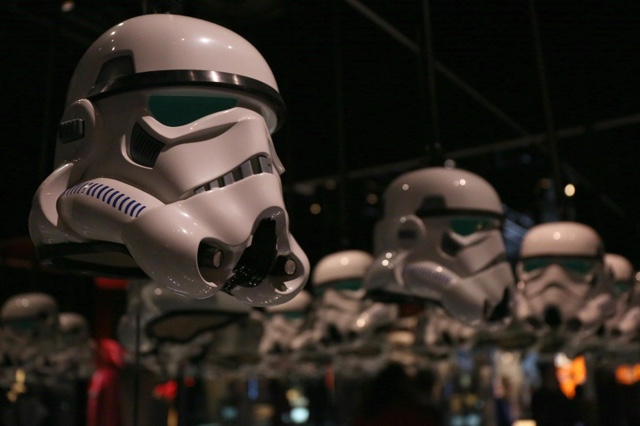 About Discovery Times Square. First: it's in, uh, Times Square, so you have to go there to see this show. It's also expensive, upwards of $40 with taxes and fees if you order online. And you will stand on line to get in, even with your timed ticket, because they do that maze thing by the entrance, and let in small groups one at a time. That said, the entrance process is well organized, they keep the galleries pleasantly uncrowded, and, once inside, you can linger as long as you like.

Star Wars and the Power of Costume runs through September 5, 2016. Discovery Times Square is located at 226 West 44th Street, between 7th and 8th Avenues.