Looking at Tod Seelie's Outland Empire, there isn't much that could be labeled "pretty" in the traditional sense of the word. The Brooklyn photographer's newest exhibit is a menagerie of decay and excess, startling images captured during multiple trips to California, including a recent month-long residency in Los Angeles.

Hollow, abandoned jets lay corpse-like in the desert in one frame, while a punk band swaps sweat with fans in another. Multiple shots of train tracks double underline California's empty expanse; meanwhile a car explodes in flames. In many of Seelie's new photographs there are no signs of life—and in just as many others there is almost too much of it.

Seelie's work gravitates toward the cultural margins, coaxing evocative imagery out of punk culture, ruined spaces, and weird subversive art sets. The photos he brings back are loaded with narratives; even his sparse landscapes tell a story. They are images so unconcerned with what we might expect that their singularity and independence becomes beautiful.

With 'Outland Empire,' Seelie's work offers evidence of the success that can be had when you simply stop giving a fuck and set off in search of strange wonder. The show opens tonight at the Superchief gallery, which sits nestled within the newly-rekindled Tender Trap bar in Greenpoint. The photographer will also be launching a zine at tonight's opening, which will feature additional images from his California trip. We spoke with Seelie last night to ask about that wild ride, and learn more about what it is that still catches his eye.

Can you walk us through your recent trip? Well I went on several trips to the desert. Usually I just find a reason to go out there, some sort of basis, and then just see what happens and take it from there.

Who do you usually go with? It varies. But one thing is, some of my friends go out and do an annual camping trip, so that's one thing I like to go out for. So I go out, and then you're camping with your friends, but then maybe you'll take off for a day or two and go wandering around. So you'll hang out with them, and they'll light something on fire.

There's a certain degree of man-made presence in almost every one of these photos, so you aren't just on your own running into these abandoned places, are you? No, I usually ask around. I'm like "Hey, I'm looking for anything weird or unusual, or peculiar." And a lot of times that will get you sent to the weird guy who makes strange lawn art out of discarded lawnmowers. Which sometimes is great, and sometimes isn't. You know. You've still gotta go check it out. 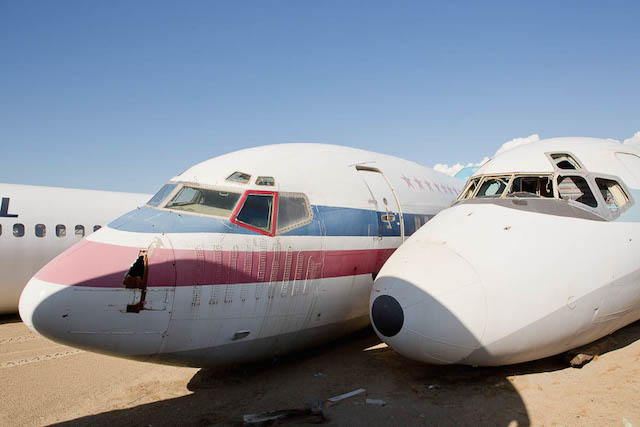 And did you find any of those intense, characters in the desert? Yeah. I have a really large portrait of a man I met named Death Valley David. And he and his whole family actually, when he was growing up, made a living making glass eyes for people that had lost their eyes. And he had a whole case of all these unique, different, beautiful glass eyes that he had made. Because he sort of grew up in the trade, so they taught him how to do it. But eventually that entire industry was replaced by plastic prosthetics. So no one would pay for glass eyes, and no one wanted hand-crafted eyes anymore. So he lives out in the desert, in a trailer, with an extremely old dog. And scrapes by finding semi-precious rocks in the desert.

How about this neon motorbike shot? That is a photo taken during that camping trip I mentioned. A lot of people in the same community all come out for this, a lot of people.

That community is the art-punk-bike community. And so a lot of people bring materials out and then build temporary installations in the desert. And so that photo was of my friend Cat Bear's installation... she brought all these materials and built this two-story diamond hut with this big light-up cross on the top of it. And brought car batteries to power it. It was pretty cool. 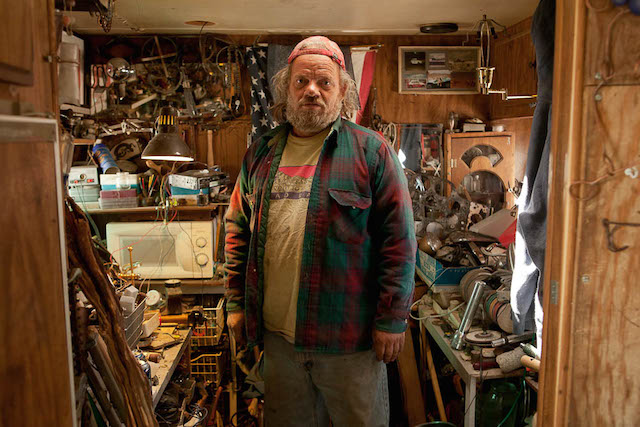 How would you describe your mechanics of your photography approach? Sometimes I feel like, when I'm prowling a new area, I feel like I'm a street photographer, even if there's no people in the photos, because it's a similar way of just walking and looking, walking and looking. So you might do that in New York and find an interesting intersection of people and colors and contrast and lights at an intersection, or you might be out in the desert and find this really interesting intersection of like a back board, and a mountain, and a mobile home in the background, and a deflated soccer ball. And to me they're pretty much the same. You're just looking. 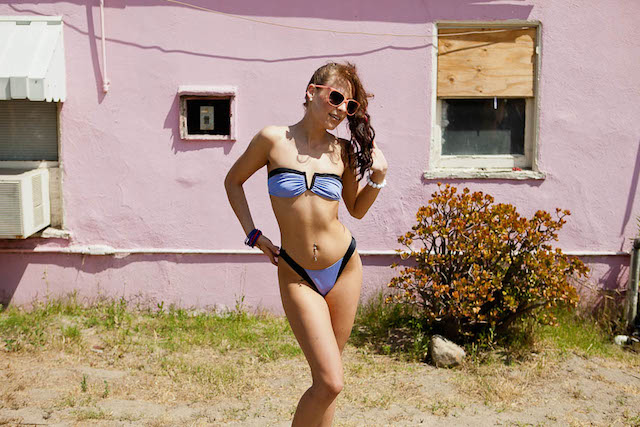 Tell me what it is about this array of subjects that keeps drawing you in? There seems to be a kind of common thread. Honestly, it's just what I like.

All of my favorite photographers growing up were just making their work. That's my idea of great photography—you just go make your work. And your work could be a shit ton of empty parking lots, or it could be portraits. Or it could be both. Following your instinct and your vision is how you're going to find what you're trying to say. That's how I work. I shoot bands because I'm at the show. I shoot crazy parties because I happen to end up there, and that tranny in a really bright blonde wig and a floral dress on a completely black couch looks amazing.

And you were able to look at this new collection and see that it works? Yes. That's partially why I made a zine of the Southern California project. I've always found the book format to be my favorite way to look at photography. So I sat down and made a zine of 36 other images that makes up the project, and I looked at it and said "Yes. It totally works."

And when I'm on an assignment for a photojournalistic job, I am there as a photojournalist, not an artist. It is my job to remain neutral and to show the event from all sides. And when I'm then making my own work, I'm not so interested in capturing every aspect of it, I'm only interested in capturing the aspect that I want. It's purely a difference between professional and personal work. 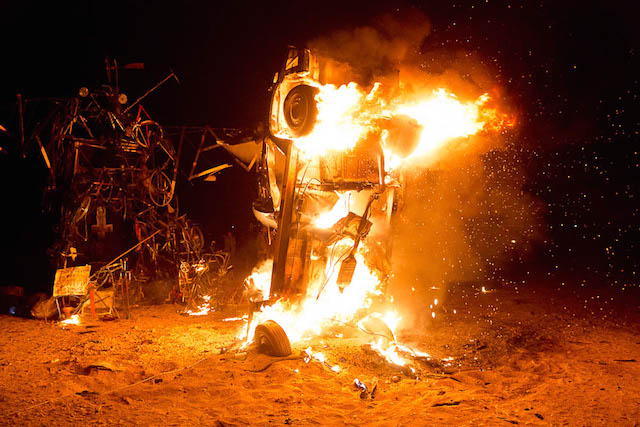 What's in the name 'Outland Empire?' The title is actually one of the hardest parts of the show, because when you're compiling a bunch of images based solely on geography, they do have a relationship but sometimes it's not an obvious one.

Also, there was a lot shot in the "inland empire," but not all of it. Eventually it came to me: punk shows at punk houses that are on the outskirts of society. I shot a punk show in an abandoned tire repair shop in South Central L.A., and the kids at that show are essentially outcasts. Then, out in the desert, I'm hanging out with a guy who scrounges for rocks and lives in a trailer. I wouldn't consider either of these to be "inside" mainstream society. 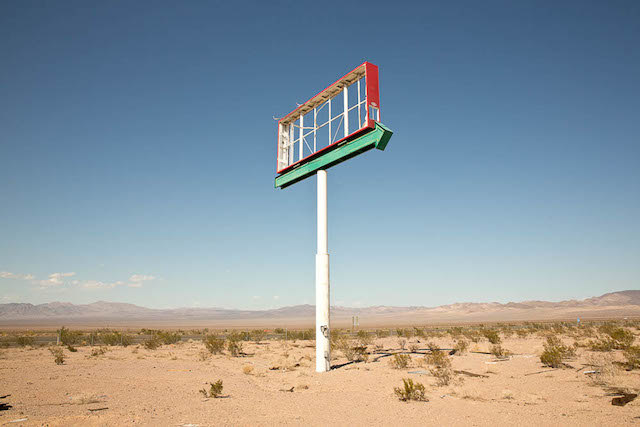 Your work seems to pull a lot of beauty out from cultures that others would turn their noses up at. Well that's too bad for them. They're missing out.

I go to nice parties with nice people who have nice jobs, and they're very nice. And they're very boring. People do go to what they're attracted to and do what they like. I don't know if there's something wrong with me but this is what I'm attracted to. My mind is wired in a way where this is the only thing that makes sense.

It's not hard for me to make it beautiful, because it is beautiful. All you have to do is capture it in a way that does it justice. Anytime I approach something, that's the number one priority.

"Outland Empire" opens with a special show and zine release at 8 p.m., April 30th at Tender Trap (66 Greenpoint Ave, Brooklyn) featuring a Q&A with the artist.

Scott Heins is a freelance photo and video journalist based in New York City, and a frequent contributor to Gothamist + WNYC. His work often centers around labor rights, housing, and policing. In 2018-2019 he traveled to four states while covering a wave of public school teachers strikes, with work featured in The New York Times, The Intercept, Getty Images, Splinter, and Bloomberg Photos. Scott is a dues-paying member of the National Writers Union's Freelance Solidarity Project.