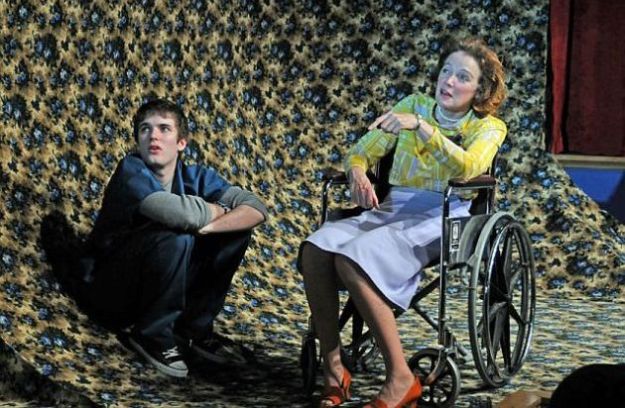 For two decades Rose Mary Woods banged away on her typewriter in relative anonymity for her boss Richard M. Nixon, until, in November of 1973, she found herself testifying in federal court about that time she accidentally erased 5 minutes of White House audiotape. Her little oopsy just happened to omit part of a conversation between Nixon and Chief of Staff Bob Haldeman in June 1972, three days after the Watergate burglary.

An exhilarating new play, STRETCH (a fantasia), finds Woods (Kristin Griffith) living out her acerbic last days in an Ohio nursing home on the eve of the 2004 presidential election. (That swing state, you’ll remember, saw its own share of dirty tricks that year.) Griffith inhabits the role with spellbinding moxie: Confined to a wheelchair, she’s an embittered but perceptive old relic swatting away those who would get her to dish about her Nixon years.

But left alone to dream, Woods bursts from her chair and into the spotlight (literally). The upstage curtain rises to reveal a band of strings, trumpet and IBM Selectric typewriter, and away we go into the jet-setting Washington world that Woods relished in her prime. Griffith’s joie de vivre as the younger Woods is arresting, and made all the more remarkable when she turns on a dime and lands back in her wheelchair, with a good natured orderly (Brian Gerard Murray) reading the papers to her.

STRETCH only drags when the orderly returns to his basement apartment to trade bong rips with his roommate (Eric Clem); these scenes serve as a counterpoint to Woods’s Nixon era memories and seem meant to illustrate the apathy of today’s youth. But the clichéd stoners seen here are too broadly drawn to have an impact, and their brain dead banter sucks momentum. Thankfully, Griffith’s electrifying performance (backed by Rachel Peters’s sparkling score) is more than enough to compensate; through her sharp eyes we see the seedy Nixon era collide in 2004 with an administration so vile that her infamous boss seems, in comparison, almost quaint.

STRETCH (a fantasia) continues at The Living Theatre [21 Clinton Street] through May 26th. Tickets cost $20.