In 2006 we started a series called NYC Album Art, kicking things off with Led Zeppelin's Physical Graffiti cover. The double-album was released on this day in 1975, so let's take another look back at that album cover—shot in the East Village—and what critics were saying of the band at the time.

The cover was designed by Peter Corriston, and features the two buildings located at 96 and 98 St. Mark's Place. (Fun fact: these buildings, as well as International Bar, are also seen in The Rolling Stones' 1981 video for "Waiting on a Friend.") The original album jacket included die-cut windows in the building shown on the cover and inner sleeves with different variations of that, with objects and people in the windows. The buildings haven't changed much since the cover was shot, however, in real life they are taller than they appear on the cover, as the 4th floor was actually taken out to fit the square jacket. These days, a tea shop called Physical Graffitea is housed in the building. Sigh?

Rolling Stone gave the album (which was mixed at Electric Lady Studios) 4.5 stars, noting that it was the band's "bid for artistic respectability," delivering on blues, ballads, "acoustic interludes... [and] bludgeoning hard rock. [The album] confirms Led Zeppelin's preeminence among hard rockers. Although it contains no startling breakthroughs, it does afford an impressive overview of the band's skill." Though the magazine's reviewer, Jim Miller, declared that "'Kashmir' succumb[s] to monotony," Creem's Jaan Uhelszki called it "exotic and musky... intriguing in its otherworldliness... certainly the best cut on the album." She does note, however, that it "could be trimmed without losing any of its mesmeric effect." While we cannot track down a NY Times review of the album, they did not name it one of the top albums of the year, giving it runner-up status in their Top 10 list: 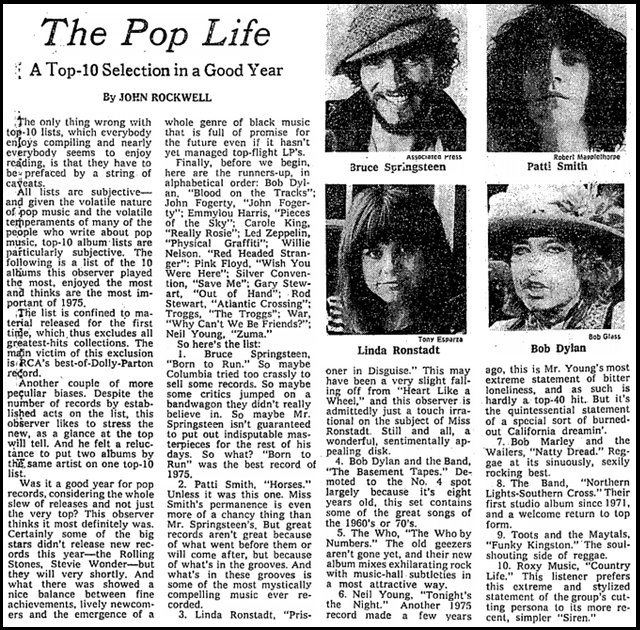 Meanwhile, the band was touring that year, and after their shows at Madison Square Garden, the Times' John Rockwell wrote: "What is missing is, to put it bluntly, creative significance. Led Zep isn't original enough to make a really important statement in its music. The four of them can produce songs that epitomize the contained aggression of the seventies and they can hint very strongly indeed toward what rock is all about. But they simply don't reach way down deep inside their audiences. And to judge from the reaction at the end of Monday night's concert, the audience knows it." In another write up of the band, Jimmy Page's guitar work is described as a "hard-rock version of rape."